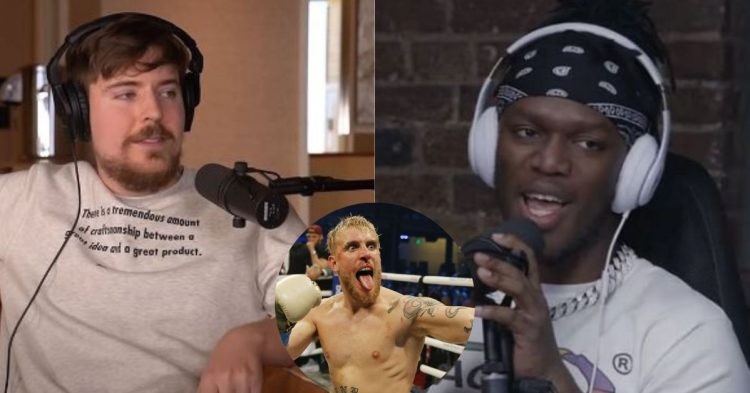 A week ago, Mr.Beast appeared as a guest on Sideman’s podcast where they discussed topics related to YouTube and many other things. During this conversation, Mr.Beast put KSI in a spot by asking him when will he fight Jake Paul in a boxing bout.

JJ dodged that question and spoke about The Problem Child’s upcoming fight against Anderson Silva. This created a lot of noise in social media and in the recent episode of BS with Jake, the YouTuber turned pro boxer reacted to that clip and shared his thoughts.

It is needless to say that Jake Paul was unhappy after seeing the video as he lashed out on KSI and shared his frustration over the British YouTuber ducking Mr.Beast’s question.

“Mr.Beast is even fed up of KSI not wanting to fight me. KSI avoided this question so f*****g hard. Answer the f*****g question KSI. We’re all sick of you ducking me bro. It’s getting old at this point.”

This is not the first time that Jake Paul has called out KSI for not accepting his offer for a fight. Because a few months ago, The Problem Child went on social media and offered KSI to fight for free at his event after JJ’s opponent Alex Wassabi pulled out due to medical reasons.

However, The Nightmare declined Jake’s offer and fought Swarmz and Luis Pineda on the same night. As it stands the likelihood of Jake Paul taking on KSI is very low as the British boxer wants a few tune-up fights to get ready for the super fight.

How did the rivalry between Jake Paul and KSI begin?

KSI and Jake Paul have been taking verbal shots at each other for more than three years now. The rivalry and the bad blood between the two is out there for the audience to see and it all started after JJ called out Logan Paul and Jake Paul for a fight.

After defeating British counterpart Joe Weller in a boxing fight, The Nightmare called out the Paul brothers and challenged them for a fight. Thereafter the feud between the two began as they both trashed each other on YouTube and social media.

The Problem Child was reluctant to fight KSI and instead took on JJ’s brother Deji in his boxing debut. Meanwhile, the British YouTuber clashed against Logan Paul in the main event of the same PPV. Jake emerged victorious in his matchup whereas the bout between KSI and Logan ended in a draw.

However, JJ got the last laugh as he outclassed Logan in the rematch. Ever since that fight, Jake has called out KSI on several occasions. Although The Nightmare decided to focus on his music career and YouTube and took a break from boxing.

After a three year hiatus, JJ was back in action in September and is planning to fight once again in January 2023. Speaking about which, the two have verbally agreed to fight in 2023. However, it is not official as they have not signed the contracts.

It would be fascinating to see if everything is sorted out and the two YouTube superstars clash inside the ring in the future.