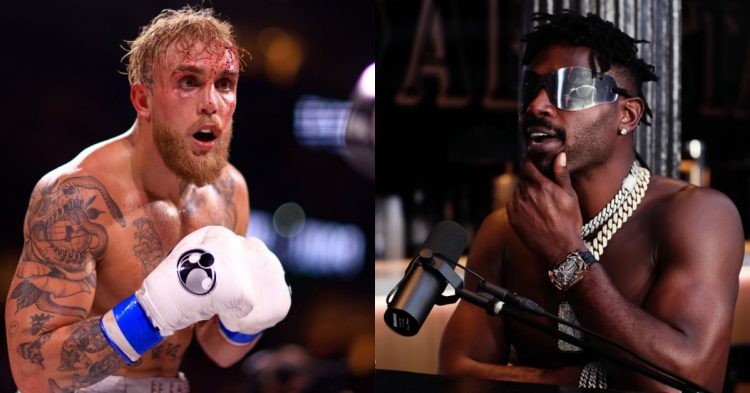 Antonio Brown is one of the most colourful characters in the NFL. The wide receiver is a one-time Superbowl winner and has played for teams such as Pittsburgh Steelers, New England Patriots and Tampa Bay Buccaneers. However, Brown is not participating in the ongoing season of the competition. So what is next for him? It looks like a potential boxing match with Jake Paul may be on the cards.

In an appearance on the Ripper Magoo podcast, Brown was asked whether he would ever consider trying his hand at boxing or not. There is no doubt about his athletic abilities and he hinted previously that his NFL career may just be over. So going up against Jake Paul may not be the worst possible option out there for him. For $5 million he may just accept the fight.

“I’m game beating up Jake Paul… I like Jake, Jake is a great businessman, great guy.” He also alluded that Jake’s last fight was fixed. “Woodley’s mama was happier, happy as I ever seen her in a loss. One time I seen Woodley lose (and) his mama didn’t even speak to him. His mama was happy. Like I seen one time Woodley lost a fight, his mom didn’t even acknowledge him like his mom was happy about the loss like giving out hugs.”

Fans can catch Jake Paul back in action later in October. He will fight former UFC middleweight champ and MMA GOAT Anderson Silva on October 29th. There are talks of him welcoming Nate Diaz to the boxing ring if he gets the win over Silva. However, a potential fight against Antonio Brown may just be a much bigger fight in terms of business revenue.

Recently, Antonio Brown found himself in the headlines once more for all the wrong reasons. According to a report from New York Post, the former NFL star exposed himself to a woman in a Dubai hotel pool. In a video, Brown was captured trying to flash his private parts to the woman whom he met very recently. Although she was laughing initially, the woman later swam away from the 34-year-old.

Jake Paul commented on the issue recently and stated his disgust about Antonio’s actions. He slammed Brown and said, “He just never fails to be a f****ng jack***! How do you end up naked in a hotel pool in Dubai? I mean you’re not even allowed to kiss people in Dubai. You’re not even allowed to do disrespectful, how the f**k? What is going through his mind? Or, is anything going through his mind?”

As of writing this report, there is no word about what consequences or if any that Brown is facing. Brown has a history of being in trouble with the law. In 2020, he was arrested by the authorities on the charges of burglary and battery. He also settled a sexual assault lawsuit in 2021 filed by his former trainer Britney Taylor.