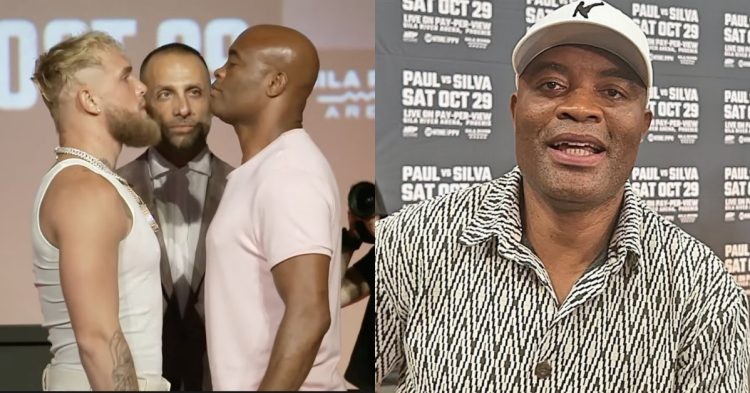 Former UFC middleweight champ Anderson Silva will return to the boxing ring against Jake Paul. The fight will go down inside the Gila River Arena in Glendale, Arizona on October 29th. Although he is in great form, at the age of 47, Silva can only go on for so long. Will the Spider retire if he comes out on the losing end against Paul?

Recently, Anderson Silva spoke about his future plans after the Jake Paul fight. Silva is often regarded as one of the greatest mixed martial artists of all time! He holds the record for the most consecutive wins in UFC history, as he won 16 successive fights in the promotion. He was released from UFC after losing 7 of his last 9 fights in the Octagon.

However, he found a new life in boxing and kept his combat sports career going. Prior to really finding his mojo in MMA, Silva had two boxing matches in 1998 and 2005 respectively. But he resumed his boxing career 16 years later and defeated former boxing champion Julio Cesar Chavez Jr. He then went on to knockout Tito Ortiz within the first round in his next bout.

How long does he plan on fighting? As previously mentioned, he will fight Jake Paul next, who is getting better day by day. On top of that, The Problem Child is only 25. So there remains a chance that Silva does not emerge victorious this weekend. But, even a loss is not going to force him to retire, as he is enjoying his time in the ring.

“No, no, definitely no… I don’t know when I’m gonna stop. I know one day I will stop. But not now… I try to challenge myself every day, and especially right now my kid started fighting, and I help my kid.” (h/t via TMZ)

Jake Paul claims he will knock out Anderson Silva

The YouTuber turned boxer, Jake Paul is a big fan of Anderson Silva. During one of their press conferences, there was a wholesome moment, when Jake and Logan Paul recreated a decade-old picture with the 47-year-old. But that does not mean that Jake wants to take it easy on the MMA legend. He predicts a knockout win over Anderson Silva.

“Anderson Silva is the nicest guy in the world and we love him. If my opponent is a d***head, I’m gonna treat him like a d***head and beat his f****ng a**. And I think people have seen that side of me. But I respect this man. I’m still gonna knock him out but respectfully knock him out.”

Can Jake Paul beat Silva? There is always a chance that The Problem Child connects to Silva’s chin with a big haymaker. Fans already know that Paul has big power behind his punches. Although his punches may not be as potent as some of Silva’s previous opponents, Anderson himself is much past his prime. Hence, he will have to be wary of Paul’s power.

What do you think of the fight? Do you think Jake Paul can put Anderson Silva’s light out in their fight? If he does, should Silva retire? Let us know in the comments down below.