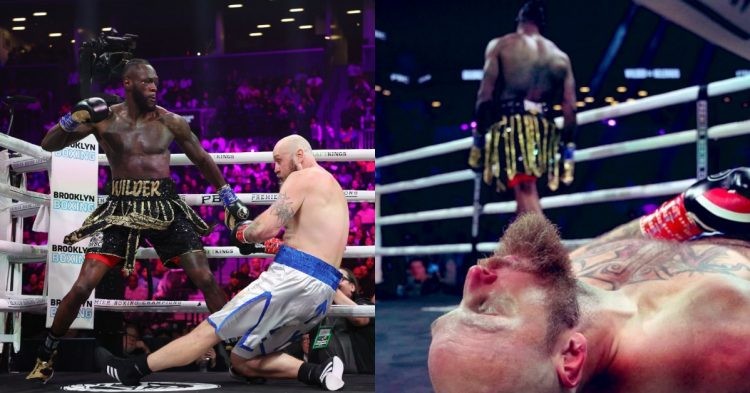 One of the most ferocious punchers in heavyweight boxing history, Deontay Wilder just made his much-anticipated return to boxing! With 41 KOs out of 42 wins, Wilder is regarded as perhaps the most dangerous one-punch knockout artist in the sport currently. However, his legacy had taken a hit after two back-to-back losses to Tyson Fury.

He came out on the losing end of his insanely entertaining trilogy against The Gypsy King. Even in losses, Wilder had great performances against Fury, especially in the last fight as he dropped Tyson twice in the same round. It proves that Wilder has the KO power to get rid of his opponent at any point of the fight, regardless of how exhausted he is.

His opponent on his return fight was Robert Helenius. Helenius held a professional record of 31-3 with losses against Gerald Washington and Dillian Whyte. However, he was on a 3-fight win streak coming into the fight. He was confident of getting a win over a somewhat diminished Wilder. So how did the fight play out? Was The Bronze Bomber able to get back in the winning column? Let’s find out!

Deontay Wilder knocks out Robert Helenius in the first round!

Deontany Wilder kept his entrance simple this time around. He was much lighter on his feet as Robert Helenius started on the front foot. Unlike his fights against Fury, Wilder showed a lot of lateral movements in Round 1 to make himself a harder target to hit. Wilder baited Helenius into coming forward and chasing him. It worked as Wilder landed his trademark right hand right at the end of round 1 and got the knockout.

DEONTAY WILDER KO IN THE FIRST ROUND!!! 😱😱😱 pic.twitter.com/XEWjlUhHOp

Wilder was very agile in the ring and did what most doubted that he could do. There was a lot of doubt regarding what his response would be after the losses. It looks like he responded like a true champion! He did not even get to land the punch on the chin with full power. It landed on Robert’s nose instead, but it did not matter as the blow immediately turned off his lights!

With the win, the 36-year-old improves his record to 43 career wins and 42 knockouts! Deontay only landed 3 punches in the fight and that was enough to get the job done. It made the fans on Twitter go insane with excitement. Even Jake Paul could not believe what he saw from Wilder.

You gotta be fucking kidding me Deontay Wilder. Wow😱😱😱 pic.twitter.com/onZGZs3V1G

The fewest Punches landed for a KO win

Following the bout, Wilder added that he was glad to be back in the ring. He also claimed that it does not matter who his next opponent is, he will be ready. Wilder named dropped Oleksandr Usyk and Anthony Joshua.

Who do you want to see Deontay Wilder fight next? Let us know in the comments down below.