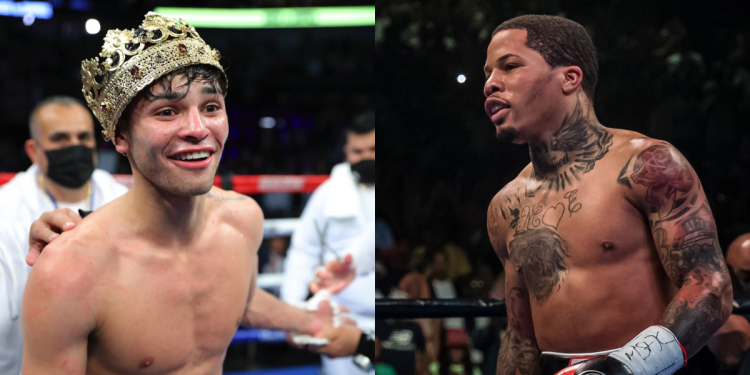 Ryan Garcia and Gervonta Davis have been on each other’s nerves for a while now. Both fighters have talked about wanting to face each other inside the squared circle, however, that hasn’t come to fruition just yet.

Their disregard for each other was on full display recently as the two went back and forth on Twitter. During the highly-anticipated undisputed title match between Devin Haney and George Kambosos Jr., Ryan Garcia took to Twitter to say something about his potential opponent ‘Tank’.

George Kambosos Jr. was comfortably outboxed by Devin Haney and while referencing this, ‘KingRy’ urged Gervonta Davis to not let their bout be “like this”. He said:

“@Gervontaa You watching this stuff? When we fight don’t let it be like this!!!”

While Gervonta Davis was quick to respond to the tweet and asked Garcia to shut up, Garcia wasn’t quite done. He replied to what ‘Tank’ had to say by saying:

“Oh yeah you say shut the f**k up but you were screaming I’m next. You should want this fight, don’t trip your disrespect will ve addressed!! Promise you that b**ch.”

When will Ryan Garcia and Gervonta Davis fight each other?

Ryan Garcia vs. Gervonta Davis is arguably one of the biggest fights to make in the lightweight division. Their distastefulness towards each other only makes it an even bigger spectacle. However, even though the fans would like to see these two enter the ring asap, there is no certainty as to when they will fight.


Gervonta Davis is coming off a spectacular victory over Rolando Romero and his future still remains in doubt. On the flip side, Ryan Garcia is currently booked to take on Javier Fortuna on July 16th at the Crypto.com Arena. Garica looks set to call out ‘Tank’ if and when he beats Fortuna.

However, the ball to make this fight happen lies in the court of Gervonta Davis who seems to be the bigger name out of the two at the moment. Moreover, Davis is the WBA (regular) lightweight champion and it makes more sense for ‘Tank’ to fight Devin Haney who is now the undisputed lightweight champion rather than fighting Garcia who will be contesting for the WBC interim lightweight championship.