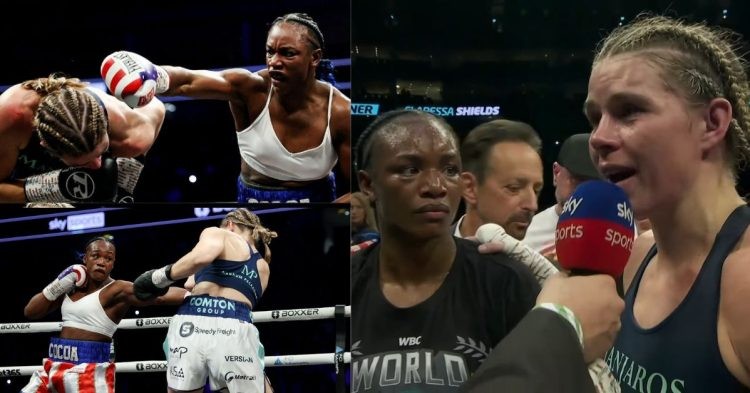 Savannah Marshall was in action in front of her home crowd at the O2 Arena in London, the United Kingdom as she took on her arch-rival Claressa Shields in a ten-round main event bout for the undisputed middleweight title.

After almost a decade of rivalry, the two boxers finally collided inside the ring and this matchup went as per the expectation of fight fans as they engaged in a wild slugfest that went to the distance. In the end, it was Claressa who came out on top as all three judges scored the bout in favour of the American boxer.

In the post-fight interview, the British boxer was questioned whether GWOAT was better than she thought. To this Marshall gave an interesting response by claiming that Claressa wasn’t as quick as she had expected.

“Claressa is a brilliant fighter, she definitely is. She is not as fast as I thought,” said Savannah in the interview.

After her cheeky comment regarding Claressa’s speed, Savannah credited the American boxer for her terrific performance. Thereafter the two fighters embraced each other and put their years of rivalry to bed.

Claressa Shields significantly outpunched Savannah Marshall in this ten-round bout and was in control for the majority of the matchup. After the fight was over, the American boxer was questioned whether she would be down to offer Marshall a rematch.

Owing to the fact that there was a rematch clause in their contract before this bout. Initially, Shields declined a rematch offer by saying that the clause was only viable if it was a controversial decision or a split decision win. But later in the interview, the American agreed to fight Savannah.

Similarly, Marshall also hinted during her post-fight interview that she would love to fight Claressa for the third time in their boxing career. With the scores tied, the bragging rights will be up for grabs and it is needless to say that fight fans around the world would love to see them fight once again.

Do let us know in the comments section below your thoughts on whether the rematch between Claressa Shields and Savannah Marshall should take place.