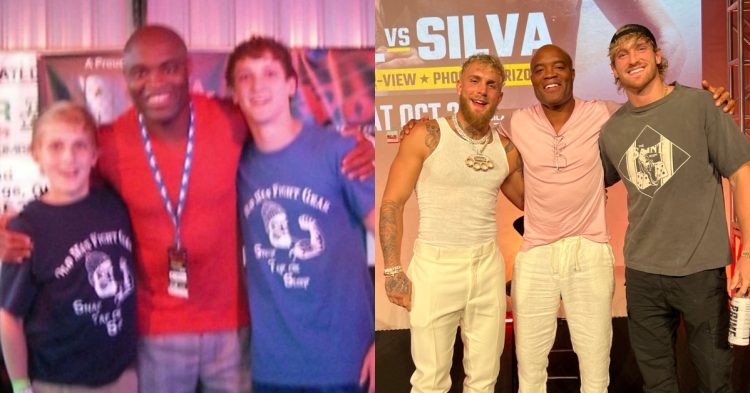 Jake Paul will go up against one of his childhood idols on October 29th. He will fight Anderson Silva in a boxing match. Unlike most of Jake’s other opponents, there is no animosity between these two. Recently, they held a press conference to promote their fight. During that, Silva recreated a beautiful moment on stage with Jake and Logan Paul.

Anderson Silva was on top of the world during his early run in the UFC. Not only did he become the middleweight champion in the UFC, but Silva also remained unbeaten in the promotion for 17 fights. It made the Paul brothers a big fan of the Spider. Recently, a picture resurfaced where Jake and Logan could be seen posing with Silva.

In the 13-year-old photo, both the Paul brothers could be seen grinning from ear to ear. Logan then tweeted the old photo with a recent picture where the trio recreated the same pose. It was a wholesome moment and even The Problem Child himself retweeted it.

Jake Paul has nothing but respect for Anderson Silva

Fighting his idol is certainly a big deal for Jake Paul. It seems as if Jake is starstruck by Anderson Silva. However, he is not letting that distract him from his end goal. Although he is a massive underdog, Paul still believes that he can knock out Anderson. But it is not coming from a malicious intention. Paul just wants to do what is best for his career.

“Anderson Silva is the nicest guy in the world and we love him. If my opponent is a d***head, I’m gonna treat him like a d***head and beat his f****ng a**. And I think people have seen that side of me. But I respect this man. I’m still gonna knock him out but respectfully knock him out.”

It will definitely be an intriguing fight to witness. The 47-year-old is coming off two straight wins over Tito Ortiz and Julio Cesar Chavez Jr. Although defeating Tito is certainly meaningful, the win against Chavez Jr is the most legitimate win of his boxing career. Jake, on the other hand, has beaten retired MMA fighters mostly; fighters who did not have a boxing background.

So the bout against Anderson Silva will more or less paint a clear picture of where Jake Paul is in his boxing career. If Jake beats the former UFC champ later in October, bigger things will be waiting for him. It looks like he will have the option to fight Nate Diaz if things go according to the plan against Silva.