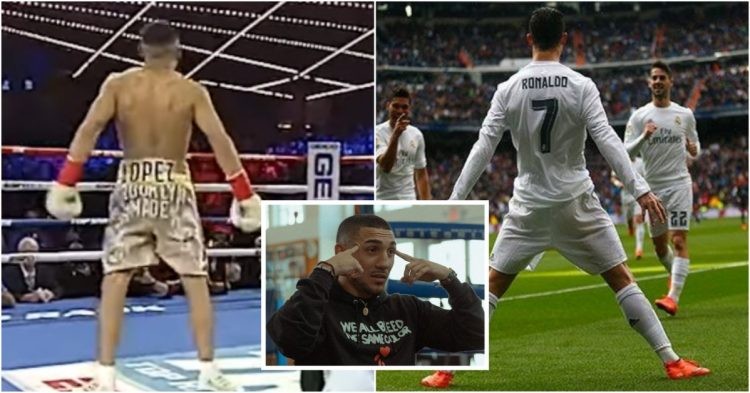 Teofimo Lopez is a young and exciting talent in the world of boxing. He created history in 2020 when he defeated Vasiliy Lomachenko to become the unified lightweight champion of the world! There was no doubt about Teo’s talent, but his win against Lomachenko was the defining point of his relatively young career. However, the fight that put Lopez on the map, was against Mason Menard in 2018.

The bout took place inside the Hulu Theater on 8th December 2018. Coming into the bout, Teofimo Lopez had a pro boxing record of 10-0. In his 11th fight, Lopez fought for the WBA-NABA, WBC-NABF, and IBF-USBA lightweight belts. Mason was certainly more experienced than Lopez. However, Teofimo did not let the bout get past the first round and flatlined him within 45 seconds.

After the bout, Teofimo was understandably elated with the win and channeled his inner Cristiano Ronaldo. As soccer fans have seen him do over the years, the Portuguese superstar has his own style of celebration. After scoring goals, the ex-Manchester United forward runs towards the corner flag and does his celebration, which has become iconic.

After his first-round KO win over Menard, Lopez ran toward the middle of the ring and did the trademark CR7 celebration. However, fans have been thirsting to see Cristiano Ronaldo do his celebration in recent times as the 37-year-old continuously found himself on the bench for Man United. As a result, he had disagreements with the manager and left the club.

However, in the ongoing FIFA World Cup 2022, Cristiano Ronaldo was benched once again. It sparked rumors that he left the Portugal national team and refused to take part in the training. The situation is so dire for him that no European top soccer club is willing to put money on him. So it remains to be seen what the future holds for the 5-time Champions League winner.

Just like his idol Cristiano Ronaldo, Teofimo Lopez also had a tumultuous few years. The high point of his career was the win against Vasiliy Lomachenko. Boxing fans and experts predicted that Teofimo would remain undefeated for a significant period of time. But, the 25-year-old lost his unified lightweight champion status in the very next fight against George Kambosos Jr.

But, leading up to that bout, Teofimo Lopez had a lot of personal issues that he was dealing with. After the bout, reports came out that Lopez was suffering from an acute respiratory illness. Doctors later confirmed that Lopez could have died during the bout. Although the result went against him, Lopez thankfully did not suffer any fatal injuries.

Almost a year later on August 13th, Teofimo Lopez returned to the ring to face Pedro Campa. He won the bout and knocked him out in the 7th round. He will next fight this weekend on December 10th, against Sandor Martin. The event will take place inside the Madison Square Garden (MSG) arena.