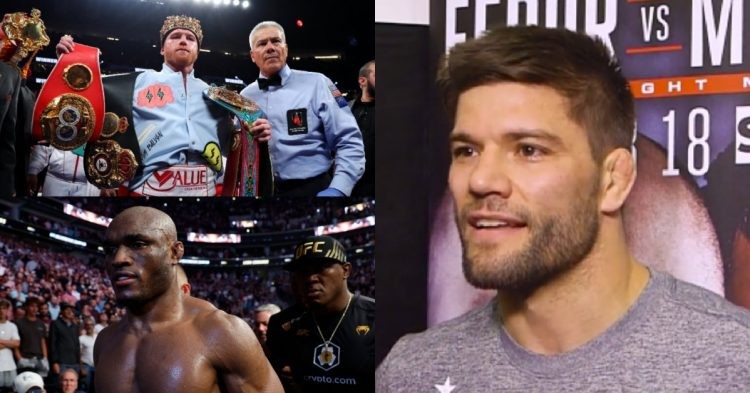 Canelo Alvarez had an excellent showing against Gennady Golovkin recently in the trilogy fight. He dominated the fight and won the fight via unanimous decision. However, the fight became an issue in the MMA community for all the wrong reasons. Alvarez made $45 million for the fight and it made MMA fans compare the amount with what UFC champs are making and Josh Thomson thinks it’s wrong.

Josh recently did his best to address the issue and defended UFC’s structure of paying its fighters. According to him, Canelo Alvarez justifies his pay because of his star power. Thomson is not wrong about the claim as Canelo vs GGG 3 sold 1.06 million PPVs worldwide as per DAZN. On the other hand, none of the UFC PPVs in 2022 have broken the million mark.

Every time Canelo puts on the gloves, it almost guarantees a huge amount of revenue for all the parties involved. Thomson thinks Canelo and Tyson Fury are amongst the only boxers who can draw huge.

“Well, first of, Canelo is the face of boxing right now. You have him and Tyson Fury are the two faces of boxing. There’s two stars in the whole sport of boxing. There’s a couple (of) other guys sure, that we all love to watch fight. Terence Crawford, Errol Spence, there are talented fighters that we love watching fight, absolutely. But can you give me more than 4-5 stars in boxing?”

However, the former Strikeforce champion used those two as an example to show how broken the system of boxing really is! While the main event fighters in boxing make an ungodly amount of money, the rest of the fighters are not well paid. Whereas in the UFC, fans are more than interested in seeing the rest of the fights on the main card.

For example, UFC 273 featured Volkanovski vs The Korean Zombie in the main event and Aljo vs Yan 2 in the co-main. However, the most attention was given to the undercard fight between Khamzat Chimaev and Gilbert Burns. So UFC does a fantastic job of investing in young fighters with potential. But that is not the case in boxing at all!

UFC distributes the money between all their fighters in a fair way. As for the notion that UFC champs are severely underpaid, Josh thinks it’s a myth and does not reflect reality.

Josh Thomson also had another explanation as to why he is defending the UFC. He revealed that UFC pays a lot more money to the fighters aside from their base salary. However, the company does not reveal the exact amount to the athletic commissions. Instead, they send out cheques in the locker room and sometimes to the homes of the fighters.

Josh’s comments are coming on the hills of Daniel Cormier spilling the beans on what big stars in the UFC really make for their bouts. Cormier stated that Conor McGregor made 15-20 million as his base salary. On the other hand, Khabib made $10 million for his last few UFC fights. The middleweight champ Israel Adesanya apparently makes in the ballpark of 5-7 million.

So it supports what Josh Thomson had to say about the fighter pay issue. He also pointed out that UFC takes better care of its fighters. The UFC Performance Institute is a facility that provides fighters with a great deal of support. They help the fighters with their training, diet and weight-cutting issues. However, something like a UFC PI does not exist in boxing.

While Josh Thomson’s points about UFC taking better care of its fighters are absolutely valid, it is still not an excuse for the significantly less amount of money that the MMA fighters make. Even Josh himself admitted that as well. But he thinks the extreme negative coverage from the media is making things much worse.

However, someone like Jon Jones, who is regarded as the greatest fighter to ever grace the Octagon, does not make even a fraction of the money that Deontay Wilder makes. According to a report from Marca, Wilder made an estimated $20 million for his trilogy fight against Tyson Fury. Fury earned $30 million for that fight as well.

But Jon reportedly made only $540,000 for his last fight against Dominick Reyes at UFC 247. However, that is just the disclosed purse. Even then, it is not good enough for a fighter of Jon Jones’ stature. Even the current heavyweight champ is not well paid either. At UFC 270, Francis Ngannou only made $600,000. It has irked Ngannou, who has threatened to quit the company.

Ngannou has repeatedly criticized the UFC and stated that they hold fighters captive in a contract which is only beneficial to one side. So it is definitely an interesting topic that MMA fans are witnessing at the moment. Former heavyweight fighter Mark Hunt stated that he used to make $950K for his UFC fights, which is much more than what the current champ makes.

What do you make of the statements from Josh Thomson? Do you think he is right to defend the current paying structure of the UFC? Or do you think it de-rails the momentum that fighters like Francis Ngannou and Jon Jones have attained regarding the issue? Let us know in the comments down below.