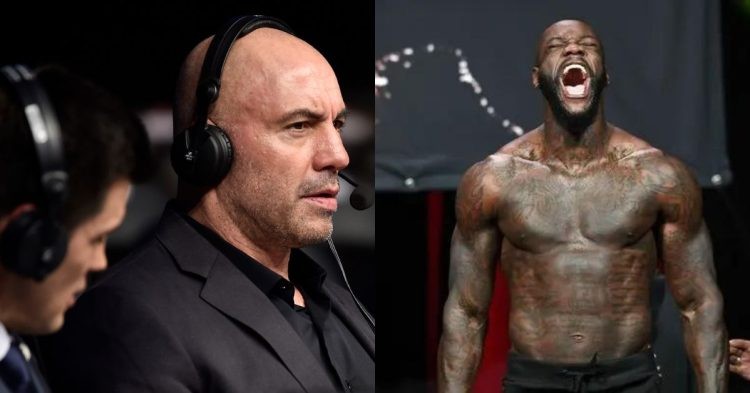 One of the most well-known podcasts on the internet is the Joe Rogan one. The audience is diverse in size and shape, and the majority of the lectures last for roughly three hours. The Joe Rogan Experience exposes its audience to a variety of various ideas and ways of thinking through interviews with celebrities, performers, scientists, sports, and people who simply have fascinating tales or interesting minds.

The Joe Rogan Experience has over 1,700 episodes and an average of 11 million listeners, making it one of the most well-known podcasts in the world. Spotify paid over $100 million on exclusive rights in 2020, demonstrating the company’s might.

In the past, Deontay Wilder has received high appreciation from Joe Rogan. Wilder is one of the all-time hardest punchers, according to the veteran UFC pundit, MMA expert, and former Taekwondo contender.

Despite not always being an expert in the sport, UFC analyst and comedian Joe Rogan has always been fascinated with boxing. He recently discussed Wilder’s knockout on a podcast with Firas Zahabi and expressed his shock at what he had witnessed.

Rogan sated “The touch of death and there is no better example then what we saw Saturday night with Deontay Wilder” He added, “Jesus Christ can that guy punch.”

Joe discussed Tyson Fury and Deontay Wilder’s historic trilogy bout in a episode of the JRE podcast. Re-watching the fight’s video, he concentrated on Wilder’s two knockdowns of Fury in the fourth round.

He stated, “There’s maybe one or two other humans that have ever lived that could punch as hard as this guy. He’s without a doubt one of the hardest punchers of all time.”

On Saturday, heavyweight Wilder makes his first appearance since his historic trilogy bout with Tyson Fury almost exactly one year ago.

Fury used aggressive strategies to defeat Wilder twice by stoppage. He put the puncher on the back foot and bullied the bully, who had previously knocked out 41 of his previous 42 opponents.

During the last year, Wilder gave retirement significant thought, but in the end, he chose to sign on to take on Robert Helenius of Finland at the Barclays Center in New York.