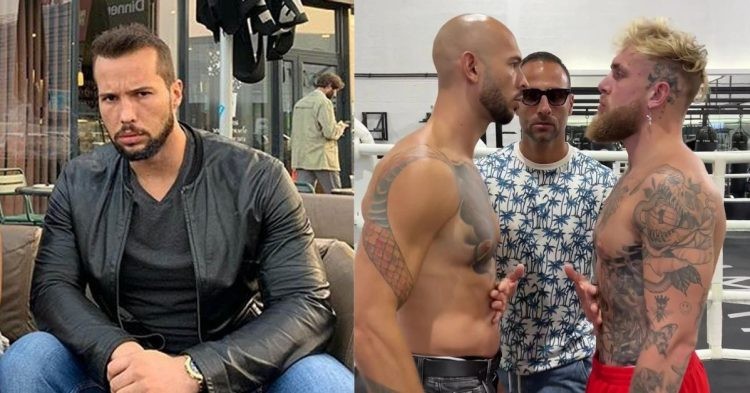 Ex-kickboxer and controversial influencer Andrew Tate might finally fight YouTuber-turned-boxer Jake Paul. Tate called out Paul a long time ago and has been aiming for a potential boxing fight with either of the Paul brothers ever since.

Recently, Tate and Paul squared off with each other in a boxing ring, hinting at a possible influencer super-fight. However, Tate’s brother, Tristan has ruled out the possibility of Andrew facing Jake in a boxing ring.

In a recent video, Tristan stated that he likes Paul and his brother, Logan. Moreover, he claimed that the respect between them is too much. Tristan said: “I like Jake Paul. I can see a future where people like KSI. There will be fights between him and my brother maybe and obviously, KSI would die.

But people like Jake Paul, I feel like there’s too much mutual respect between our camps. I feel like we’re gonna collaborate in some way and it’s not gonna be punching each other.”

Tate insisted that they and the Paul brothers should collaborate in some way soon but a fight won’t be happening. Both of the Tate brothers stated that they have no problem with Jake. But on multiple occasions, ‘Cobra’ has called out Jake’s brother and even said that he’d fight Logan for free.

However, Tristan hinted that his brother facing another influencer boxer, KSI is more of a possibility. Tristan also stated that in such a scenario the popular British influencer, KSI “would die.”

KSI is also active in boxing and recently created history when he beat two opponents on the same night. He has fought Logan before and defeated him, but recently stated that he has returned to the boxing realm with the final goal of beating Jake.

Jake Paul and Andrew Tate have been going back and forth against each other on social media for quite some time. However, things have changed now as Tate has recently stated that he has no problem with Paul but he respects him for being a legitimate boxer.

‘Top G’ is one of the most famous people on the internet but his controversial political views and misogynistic statements resulted in his cancelation. Tate is a former four times kickboxing champion and amassed an overall pro record of 76-9.

On the other hand, Paul also supported Tate on his podcast following the latter’s ban from all social media platforms earlier this year. Recently, ‘The Problem Child’ came face to face with Tate and uploaded a video showing both of them squaring off against each other in a boxing ring. Paul hinted at a potential fight against Tate and captioned: “negotiations”.

Fight fans and people, in general, will be very eager to see two of the internet’s biggest stars fighting in a boxing match. However, Andrew’s brother’s statement has ended that possibility. Tristan said that there is too much respect between each other’s camps, so a fight won’t likely happen.

Meanwhile, in an interview, Andrew listed three targets he’d fight for personal beef: liberal commentator HasanAbi, Jake’s brother Logan, and YouTuber True Geordie. Meanwhile, ‘The Problem Child’ is coming off a decision win over UFC legend Anderson Silva and is looking for his next opponent. Paul’s last fight has established his legitimacy in boxing and opened up new possibilities.