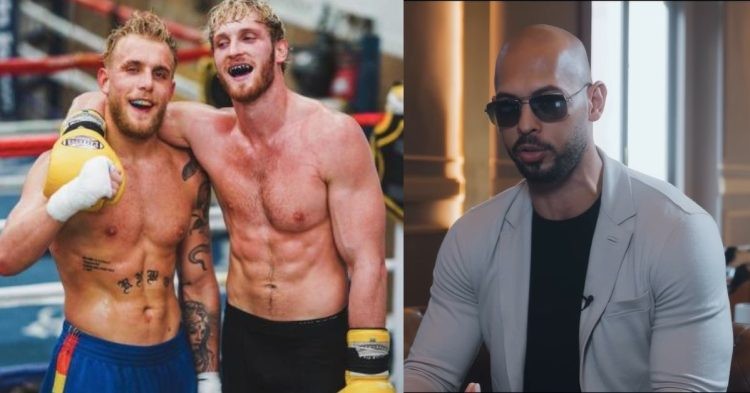 Andrew Tate explains how his rivalry started with the Paul brothers (Credit: YouTube)

Controversial social media star, Andrew Tate has called out the Paul brothers multiple times before for a boxing fight. Tate is one of the most famous men right now and has stirred up the internet after making controversial and misogynistic comments.

However, he has been banned from all social media platforms for promoting toxic masculinity and voicing controversial opinions on various subjects. In an interview, Tate explained about the origin of his rivalry with the Paul brothers.

Tate slammed Logan for having a fake personality and doing everything to stay relevant. He said: “He doesn’t believe in the things he says, he’s told what to say.”

“Because he was canceled before and it emotionally destroyed him, where he sat on camera crying his eyes out like a little girl instead of being a man about it. He’s so fearful of the mob and being canceled again that he’s willing to say anything he’s told.”

Tate brought up Logan Paul’s past controversies from 2017. Paul faced backlash after he made a video in Japan’s suicide forest and showed a dead body. The video was later deleted and Paul made issued an apology. Tate added:

“Before I was canceled, him and his boyfriend Mike did endless videos supporting me, laughing, saying how funny I was, tagging me on Instagram, inviting me to places. The second I’m canceled, they flip reverse it and sh*t themselves because they don’t want to get canceled too.”

According to Tate, Logan and his friends were on good terms with him before he was canceled. But after Tate was banned from the internet, Logan flipped the script in the fear of getting canceled again for supporting Tate.

Andrew Tate says he will fight Logan Paul for free

Andrew Tate believes Logan Paul does not believe in anything he says. In the same video, Tate slammed Logan and stated that “Paul is a tool of the matrix” and he would fight Logan for free.

“He is a bought and sold individual with no soul. He doesn’t stand up for anything and he doesn’t mean anything that he says,” Tate said.

According to Tate, Logan speaks on any subject just to stay relevant. Moreover, Tate believes that Logan gets his script written by someone else and is not allowed to speak freely on his channel. He added:

“He will flip-flop on any issues he can be bought and sold on. The dude’s a bi**h. Logan Paul is a bi**h and I will say that publicly. I will fight him for free. The guy is an idiot.”

Tate is a former three-time Kickboxing champion. He amassed a total of 43-9 record in his professional kickboxing career. Given his fighting history, it is safe to assume that he could get himself in a fight with either of the Paul brothers.

At first, Tate called out Jake Paul for a boxing bout. Paul was then picking fights with retired UFC athletes who were non-boxers. Tate even offered $3 million and claimed that Paul needs a “reality check.”

However, that fight never played out as Jake did not want to give a platform to Tate as he was banned from all major social media platforms. But Logan wanted to step in and fight Tate instead. Unfortunately, no statement was made regarding the potential fight and they moved on from the idea.