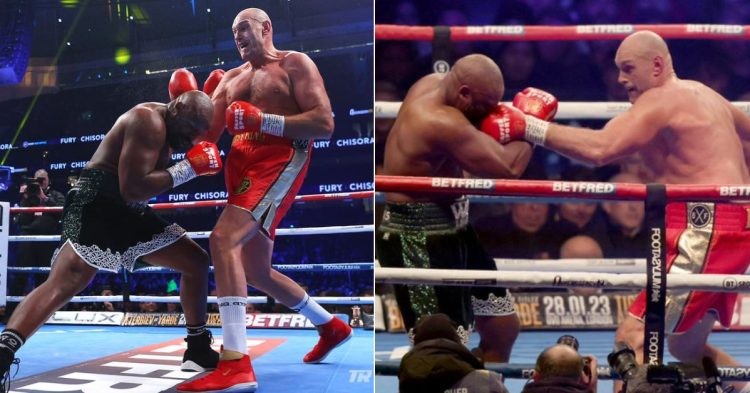 Tyson Fury came close to finishing Derek Chisora in the second round and in the third round, but as we had it, the bout lasted for almost ten rounds as The Gypsy King picked up a stoppage win over Chisora to retain his WBC and Lineal heavyweight titles. In the process, Fury became the first fighter to stop Chisora in over four years.

Chisora’s last stoppage loss came against Dillian Whyte back in 2018. During these four years, Dell Boy fought the likes of Oleksandr Usyk, Joseph Parker, and Kubrat Pulev among others.

Corner of Chisora should do compassionate thing and stop it. #FuryChisora3

Short right hands and vicious uppercuts proved to be the key for Tyson Fury who used his reach to completely dismantle Derek Chisora in the trilogy fight inside Tottenham Hotspur Stadium in London. Once again, Chisora showed the heart of a warrior as he stood face-to-face with The Gypsy King despite getting battered by Fury’s elusive footwork, speed, and movement.

“Thanks to the ref, as a fighter you don’t want to stop,” Chisora said after the fight.

His corner needs to pull him out now. No good having a brave corner.

That was an uncomfortable watch. The crowd was silent and must of felt the same – fight should of ended in round 5/6.

With a left swollen eye and blood spurting out from his mouth, it was in the tenth round that the referee decided he had seen enough. However, according to the commentary team and fans on social media, the fight should have been stopped much earlier.

Derek Chisora shows the heart of a warrior against Tyson Fury

Be that as it may, Chisora showed great bodywork, connecting body shots at will. However, he still looked stale compared to Fury’s attack. It won’t be wrong to say that Chisora had the puncher’s chance against Fury, and he made it clear by looking for an overhand right from the very first bell.

It’s a dark night in our beloved sport.
I hope everyone remembers this night in 10-15 years time when there’s a fund raiser for Del.
Shocking night! Where was Don Charles in looking out for the man he calls his son?.?.

That fight should have been stopped way earlier and by that I mean before they even got in the ring.

This fight should have ended 30 mins ago.

Despite a significant height and reach disadvantage, Chisora did what he could do best and that was to target Fury’s body. Needless to say, the number of times Chisora was able to connect Fury with body shots would have certainly given some hints to Oleksandr Usyk watching the fight ringside.

Be that as it may, it’s safe to say it was a horrible match-up considering Chisora is way beyond his prime and at age 38 years old, it was always going to be a fairly one-sided fight and that’s what it turned out to be.

Cristiano Ronaldo Before and After Pictures: Did He Get Plastic Surgery Done?