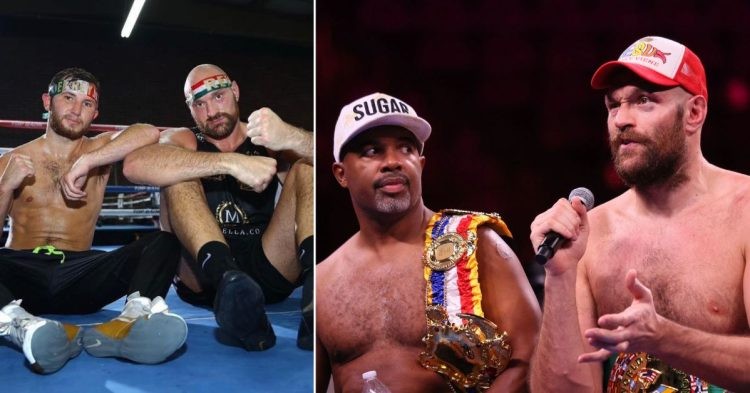 Tyson Fury has seemingly parted ways with trainer SugarHill Steward after he announced that he will join hands with Isaac Lowe as his new trainer ahead of the upcoming trilogy fight with Derek Chisora. Tyson Fury, announced his retirement earlier this year after a scintillating win over Dillian Whyte. Fury announced that he would face Derek Chisora in a trilogy fight on December 3, 2022.

Much to the surprise of boxing fans, Fury also revealed that Isaac Lowe will serve as his new head coach. Needless to say, this has raised suspicion over Fury’s relationship with former trainer SugarHill Steward.

When did Tyson Fury appoint SugarHill Steward as his head trainer?

Tyson Fury appointed SugarHill Steward as his head coach back in 2019 to prepare him for the much-anticipated rematch against Deontay Wilder. The partnership between the two would reap high benefits as Wilder defeated Wilder both in the rematch and in the trilogy fight to become the WBC and Lineal heavyweight champion of the world.

Tyson Fury and SugarHill Steward met each other for the first time back in 2010 at Kronk gym. SugarHill is the son of legendary trainer Emanuel Steward.

Fury’s decision to switch from Ben Davison came in the wake of Davison’s defensive approach. Needless to say, going against someone like Deontay Wilder, Fury and camp thought it was important to find shelter under a trainer who honed his aggressive style of boxing. SugarHill Steward proved to be the right choice. However, it seems like their relationship has soured over the last year.

Tyson Fury’s father slammed Ben Davison after Fury’s “sluggish” outing against Otto Wallin. While we did not see any decline in Fury’s performance against Whyte in his last fight, it is learned that SugarHill Steward had very little role to play during the fight camp for Dillian Whyte.

SugarHill Steward leaving a comment on Tyson Fury’s Instagram video in which he claimed Isaac Lowe is his new trainer… pic.twitter.com/H3Is6sqVyg

Moreover, SugarHill Steward’s reaction to Tyson Fury announcing Isaac Lowe as his head trainer begs to ask so many questions. A sarcastic, “good luck with that” with a facepalm emoji certainly means something is up!

SugarHill Steward has now arrived in the UK to train Tyson Fury for the Derek Chisora trilogy fight on Dec 3rd.

While much is not known regarding their relationship right now, Regardless, it seems like they are still Fury and SugarHill are still friends and will be part of Fury’s camp for the Chisora fight.