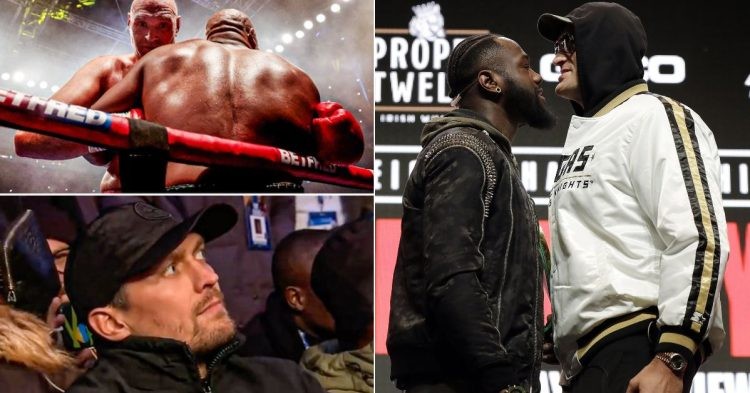 Tyson Fury has hinted at a possible fourth fight against Deontay Wilder after earning a stoppage win over Derek Chisora in his return to boxing this weekend inside Tottenham Hotspur Stadium in London. In what was a dominating performance from The Gypsy King, the British heavyweight champion absolutely battered Chisora en route to a tenth-round stoppage win. Following the fight, Fury called out Oleksandr Usyk and also expressed his interest in fighting Joe Joyce.

Fury has also mentioned in the past that he would love to fight Joe Joyce in a scenario where a deal can not be made with Oleksandr Usyk for the undisputed heavyweight titles. However, amidst all this, Fury also teased a possible fight against Deontay Wilder, a rivalry that is arguably the greatest in modern-day boxing.

Needless to say, Fury is willing to skip Usyk and Joyce if it means fighting Deontay Wilder for the fourth time. And he is not looking for arenas to fight arguably the greatest puncher in heavyweight boxing today. During the post-fight interview, Fury stated that he would love to fight Wilder in the US inside the Allegiant Stadium, to make it three in a row after his incredible performance inside the Wembley Stadium and Tottenham Hotspur Stadium.

The WBC recently ordered Wilder vs Ruiz which will serve as the eliminator for Fury’s WBC title. Needless to say, the winner of Wilder vs Ruiz will become a mandatory challenger for the WBC gold.

Making a U-turn from his previous statement where Fury stated that he has no intention of fighting Wilder again, having fought him three times already – an interest in fighting him for the fourth time certainly raised some eyebrows. Fury is already under a lot of scrutiny from boxing fans after accepting to fight Derek Chisora and might receive a lot of flak if he decides to skip Oleksandr Usyk after that call-out inside Hotspur Stadium in front of “60,000” fans.