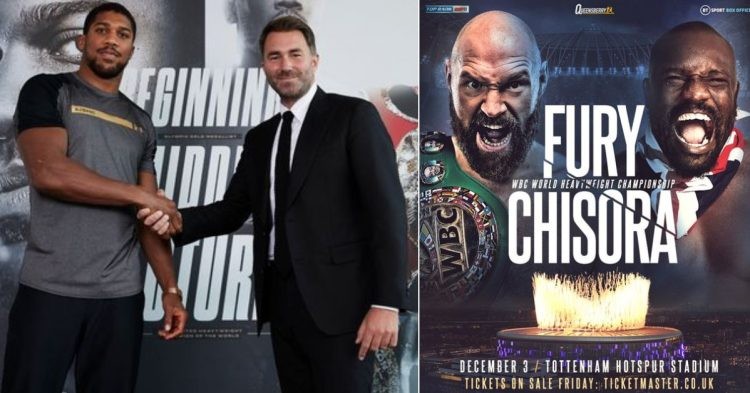 Anthony Joshua with Eddie Hearn and Fury vs Chisora

Tyson Fury vs Derek Chisora will share the boxing ring for the third time this weekend on December 3 inside Tottenham Hotspur Stadium in London, England. The buzz around the whole event is relatively lackluster, to say the least, however, the attendance figures are pretty exciting.

Over 50,000 tickets were sold in the first 24 hours for Fury vs Chisora 3. Tottenham Hotspur Stadium boasts a capacity of 62,850 fans. While a full house is not guaranteed, 50,000 fans inside the stadium is no less feat. However, Eddie Hearn believes that the numbers are exaggerated and doesn’t more than 50,000 fans to be present in the stadium when it all goes down on December 3.

The Gypsy King will put his WBC and Lineal heavyweight title on the line against former adversary Derek Chisora. Going into the trilogy fight, Fury already holds back-to-back wins against his fellow British boxer.

Tyson Fury vs Derek Chisora will not have more than 40,000 fans, says Eddie Hearn

Anthony Joshua‘s promoter Eddie Hearn believes Tyson Fury vs Derek Chisora 3 will not even see more than 40,000 fans. Slamming the exaggerated figures, here’s what Hearn had to say.

“It’s very difficult when there’s four shows all in the same city, and another one next week where they’re probably going to do 30,000 at Tottenham.” Hearn said.

Juan Francisco Estrada vs. Roman “Chocolatito” Gonzalez will also take place on 3 Decemeber, which could further divide the boxing audience. The reception for the PPV price announcement hasn’t been great either, with fans expressing their thoughts on the fight owing to the high PPV price and lack of interest.

Hearn believes the cold weather of December will play a huge factor and is of the idea that even 30,000 tickets at this time is a great result.

“I don’t know whether they’re going to open the top tier, I don’t know. I mean, it’s very difficult, especially in December when it’s freezing.”

Earlier, boxing journalist Dan Rafael had claimed that the tickets for Fury vs Chisora 3 is a “fake sellout” with thousands of tickets still available on websites that are re-selling the tickets. It’s a common strategy by promoters to hype up an event, however, an event involving the likes of Tyson Fury would need that is quite disappointing.