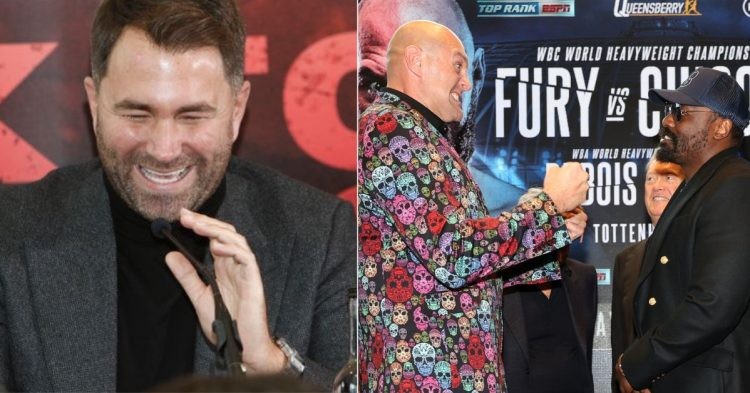 Tyson Fury vs Derek Chisora 3 will go down this weekend on December 3 inside Tottenham Hotspur Stadium in London. The heavyweight stalwarts will share the boxing ring for the third time in what promises to be a slugfest between the two giants of the game. Earlier, it was reported that over 50,000 tickets were sold in the first 24 hours, and now George Warren has confirmed that the event has sold in the excess of 60,000 tickets.

Tottenham Hotspur Stadium has a capacity of 62,850 fans, and a number beyond the 60k mark is certainly a huge feat. Moreover, in the freezing cold of Decemeber, Fury vs Chisora 3 has turned out to be hugely successful as far as the attendance figures are concerned. However, doubts still linger surrounding the authenticity of these figures, with many fans, including Eddie Hearn and boxing journalist Dan Rafael arguing that the numbers are fake.

Not only are tickets still available for sale on Ticketmaster AND Stubhub AND Viagogo, you can buy them for around £50. When Fury fought Dillian Whyte the cheapest tickets cost a LOT more.

Impossible as these are available on Ticketmaster at 13:46 on 01 December. Not like him to lie. pic.twitter.com/14T27dwkrz

That’s not all, Hearn even claimed that he would be surprised if half of those numbers show up, however, he added that even a 30,000-40,000 crowd at this time of the year is a successful event.

As for creating a compelling event, the name Tyson Fury should have been enough in the first place. However, the match-up against Derek Chisora has received huge criticism from boxing fans who aren’t too keen on watching the duo share the boxing ring for the third time. Fury has bested Chisora the last two times and in a comfortable fashion.

Reality ticket sales were poor and thats not on a hate vibe, I actually managed to purchase tickets one week before fight week whilst Dillian Whyte fight I was looking for 3 days and was none left.

Works for me because I managed to get tickets to see 2 legends of boxing b4 bday!

Cap. My seat was upgraded to basically ring side because they didn’t sell out.

If its sold out what am I missing here? pic.twitter.com/5Ro0T0yQAb

“You know, 30,000, 40,000, whatever it is is still a very good crowd. It’s difficult, you’ve got to create a compelling event.” He said. “It’s very difficult when there’s four shows all in the same city, and another one next week where they’re probably going to do 30,000 at Tottenham,” Hearn added further.

It’s not necessarily lying if the tickets are showing sold out on the website where official tickets are being sold. In the case of Fury vs Chisora, that is not the case as some fans claim. Tickets are still available on Ticketmaster.

Something tells me you might be lying there George, can’t quite put my finger on it though 🤔 pic.twitter.com/1z7Xz6DUhn

People trying to resell them less than half price 😂 https://t.co/939mp3Szir

A lot has to do with buying the tickets in bulk to re-sell them on other websites and this has been the case with Fury vs Chisora 3 where tickets are still available through other platforms.