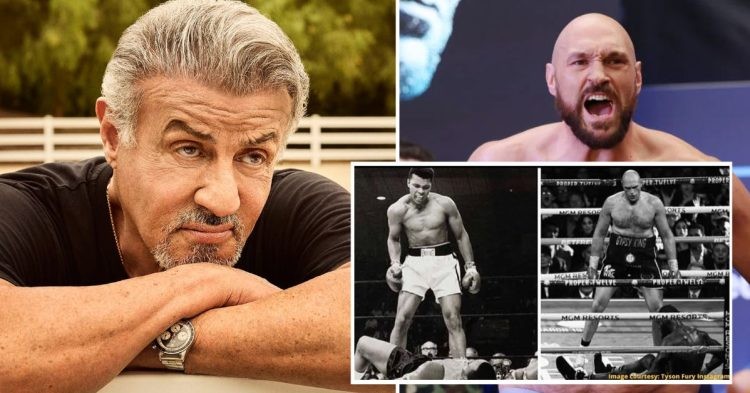 Sylvester Stallone, famed for playing Rocky Balboa in the Rocky movies and a bunch of other highly successful movies was in high praise of Tyson Fury when the duo appeared side by side on a virtual call during an ITV chat show. The famed actor did not mince words as he expressed his thoughts on the British boxer.

Sylvester Stallone did not explicitly say, Tyson Fury would have beaten Mike Tyson and Muhammad Ali but passed on a compliment that certainly confirms the same.

“When you put together all your skills and plus your heart and your ability to recuperate and how you can move yourself around so well at your size. There’s no-one that could have beaten you in any era.” Stallone said.

Great to be back on the @JRossShow

The remark was very well received by the audience as a visibly overwhelmed Fury accepted the compliment. The 76-year-old boxer trained in boxing during his early years and truly understands the dynamics of the sport. Needless to say, a compliment is certainly going to boose Tyson Fury’s confidence ahead of his boxing return against Derek Chisora.

Is Tyson Fury the greatest heavyweight of all time?

This pic in honour of the great @MuhammadAli pic taken over 50 years apart.

Shakur Stevenson has also claimed that Fury beats Muhammad Ali in his prime. “I’m about to say something that’s going to make y’all mad, Tyson Fury would beat Muhammad Ali.” Shakur said. “Bro, he’s 6-foot-9. Ali is like 220 [pounds]. Y’all right, I’m supposed to stick with my people. But I got to be a realest, bro. Tyson Fury is 6-foot-9, 300-pounds.” He further added.

If Ali would of had twitter all them years ago would u lot of hated him the same for talking his mind& believing in his self?? I’m the #1

It’s quite similar to what Sylvester Stallone said and claimed, Tyson Fury is truly the greatest heavyweight boxer of any era. Fury’s size and his skills are a deadly combo, and any heavyweight boxer would have problems going against the Gypsy King.

It’s safe to say Tyson Fury is not retiring anytime soon, having announced he will fight three more times in 2023. The only thing missing from Fury’s resume is the undisputed heavyweight title and a resume boasting more names to make a case. The Gypsy King is just 34 right now, and if he keeps winning, there’s no denying he will go down as the greatest heavyweight boxer of all time.