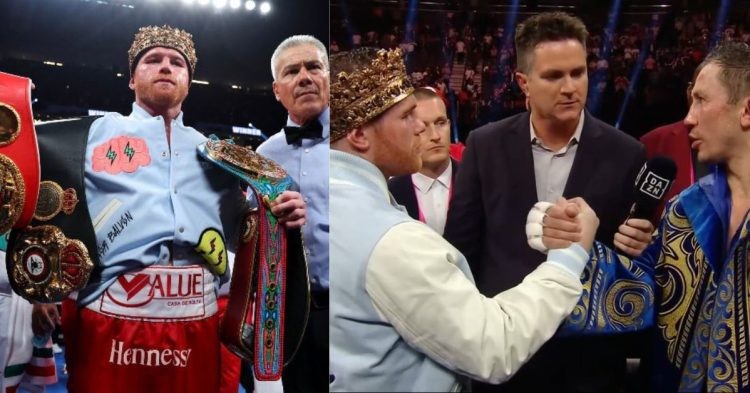 Saul Canelo Alvarez stepped inside the ring to take on longtime rival Gennadiy Golovkin in a twelve-round trilogy bout that took place at the T-Mobile Arena in Las Vegas. The Mexican super middleweight’s undisputed titles were on the line in this big stakes fight.

Leading into this fight, Alvarez suffered a one-sided unanimous decision loss to Dimitry Bivol in his quest to win the light heavyweight title in his last bout. Meanwhile, Golovkin stopped Ryoto Murata in the ninth round to unify the middleweight titles.

Subsequently, everyone was expecting a razor-close trilogy bout as their first two matchups ended in highly controversial decisions with a lot of drama. However, it was not a close battle as Canelo came out and put on a boxing masterclass and dominated GGG from start to finish to retain his titles and win the bragging rights of this rivalry.

The Mexican super middleweight out landed and overwhelmed Gennadiy Golovkin with his power punches for almost the entirety of the fight. Canelo Alvarez used his speed and countered Golovkin with his right hand and he regularly landed good combinations.

The Mexican super middleweight never looked in trouble throughout the fight and he landed some powerful shots and stunned Golovkin in the fourth and fifth rounds. However, GGG made a comeback in the last four rounds of the fight as he controlled the pace and landed more shots. But it was too late as he was not able to drop Canelo and finish the fight.

Consequently, all three judges scored the contest 116-112, 115-113 and 115-113 in favour of Canelo Alvarez and he got the last laugh as he won the trilogy bout via unanimous decision.

It is needless to say that there was bad blood between Canelo Alvarez and Gennadiy Golovkin leading up to the trilogy fight. However, after sharing the ring for 36 rounds, there was mutual respect and they squashed their beef as soon as the fight got over.

Canelo and GGG embrace in the middle of the ring 👏#CaneloGGG3 pic.twitter.com/MCe21KTCUa

Initially in the post-fight interview, Canelo thanked his supporters for sticking with him throughout the bad phases of his career and later he praised Golovkin for giving him a hard fight inside the ring.

“I’m glad to share the ring with him” #CaneloGGG3 pic.twitter.com/mPloGXJrRp

“Thank you for everything. We give them three good fights,” said Canelo to Golovkin.

Thereafter the interviewer asked Canelo whether the trilogy was different as compared to the first two matchups. The Mexican boxer denied and lauded GGG’s performance.

“He’s a really good fighter, he’s a great fighter and that’s why we’re here. I’m glad to share the ring with him.”

This trilogy was not the most exciting of fights as either fighter was unable to land a significant blow and hurt their opponent. Nevertheless, this was an epic rivalry and it was great to see Canelo and GGG share mutual respect after the fight.