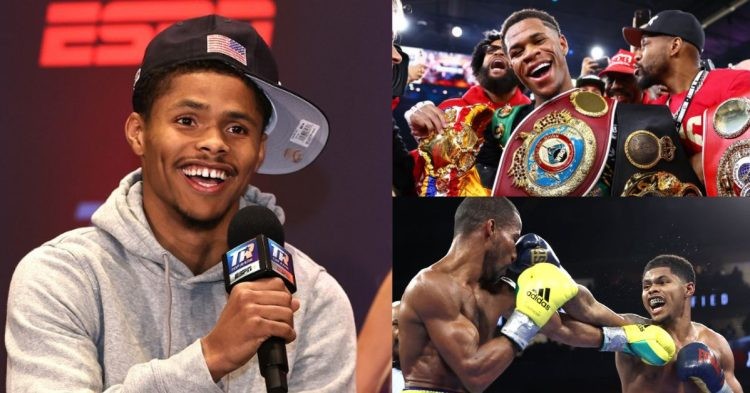 Unified junior lightweight champion Shakur Stevenson returned to action to defend his titles against Robson Conceicao in a twelve-round fight that took place at the Prudential Center in his hometown in Newyark.

Leading into this bout, Stevenson had to vacate his WBC & WBO belts after failing to make the championship weight due to health issues. Despite suffering such a big setback, Shakur put on a great show and dominated Robson throughout the twelve rounds to claim a unanimous decision win.

With this win over Robson Conceicao, the American boxer continued his stellar run in the junior lightweight division and he extended his undefeated record to 19-0. However, this was his last fight in the 130-pound division as he announced that he would move up to the lightweight division.

Following his unanimous decision win in front of his home-crowd, Shakur Stevenson was asked who he would like to face next in his first fight in the 135-pound weight class.

The 25-year-old boxer made his intentions clear as he demanded a title shot against Devin Haney. Shakur also said that he is open to facing Vasyl Lomachenko but set his priorities for a title shot while speaking in the post-fight interview.

“Everybody at 135 gotta get it. We gotta fight the champ. Me and Devin, we can lock it in after he fights Kambosos. I’ll fight Lomachecnko, too.

Shakur Stevenson did what was expected of him as he outclassed Robson Conceicao from start to finish to pick up a resounding win in what was his last fight as a junior lightweight. The 25-year-old boxer never looked in trouble as he controlled the tempo of the fight with his speed and range.

Stevenson mixed it up very well and landed some big shots to hurt the Brazilian Olympic gold medalist. However, Robson showed great determination to survive the onslaught and frustrated Shakur. This led to a point deduction for the American boxer after he threw Conceicao on the mat as the challenger attempted a clinch in the ninth round.

Stevenson landed career high for total punches & body shots vs. arguably his best opponent, who landed just 5 punches per round (landed single digits in 11 of 12 rounds) and just 12% of his total punches. pic.twitter.com/xYbNstFUW4

In the end, this incident didn’t play a significant impact on the outcome of the bout as Shakur significantly out-landed Robson. Consequently, the judges scored the bout 118-108, 117-109 and 117-109 in favour of Shakur Stevenson and this won matchup via unanimous decision.