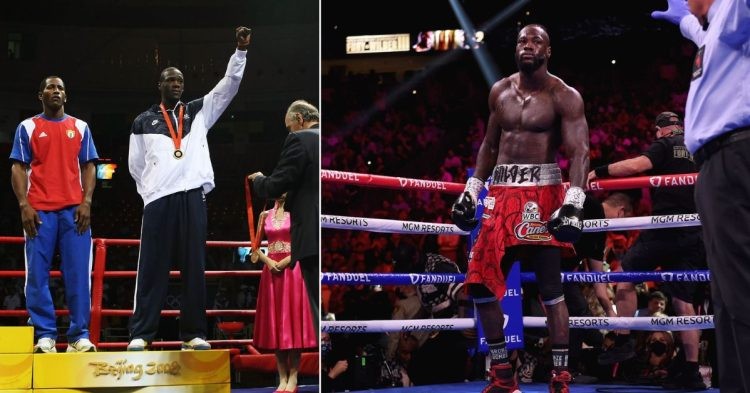 This was way before Deontay Wilder was a household name. The Bronze Bomber was yet to conquer the sport of boxing and make a name for himself as arguably the greatest puncher in the history of the sport. All the glory and riches that Wilder enjoys today are but simply a reward for his persistence and hard work that he put up from a very young age.

Deontay Wilder learned some lessons quite early in his life. He learned at the age of 19 that he was going to be a father to a daughter who would be born with a birth defect called Spina Bifida.

Wilder was given the option to terminate the baby by the Doctors, but Wilder decided against it. He was attending junior college at the time. Wilder dropped out of college and did odd jobs to make ends meet for his family. This included flipping pancakes at a restaurant and a bunch of other jobs to earn for his daughter.

There was a time when the expectations of taking care of a daughter suffering from a life-threatening disease got the better of him and he found himself under severe mental stress. Deontay Wilder even contemplated suicide at one point. He knew life wasn’t going to be easy and he had to be ready. Wilder’s father had taught him lessons about taking charge of the situation and his belief in god was too strong to be buried by any negative thought.

“I was just a guy in college, was on the basketball team. I’d do it — in terms of getting into boxing — all over if I had to for my daughter. She’s the one that got me into boxing.” Wilder has stated.

When did Deontay Wilder start boxing?

Deontay Wilder was just 20 when he started boxing, this was back in 2005. Wilder’s journey into boxing began with Skyy Boxing Gym under head trainer Jay Deas.

The Bronze Bomber showed early signs of greatness. He was quick on his feet with incredible power in his hands and in under three years, Wilder hadn’t only secured a gold medal in US National Championship and the 2007 Golden Gloves tournament, but also made it to the USA Olympic Team, winning the Olympic trials in just 21 bouts.

Three years since starting his boxing career, Deontay Wilder went on to put up an emphatic performance at the 2008 Beijing Olympics, securing a bronze medal for his country. The monicker Bronze Bomber came into effect soon after his
Tags: BoxingDeontay Wilder
Previous Post