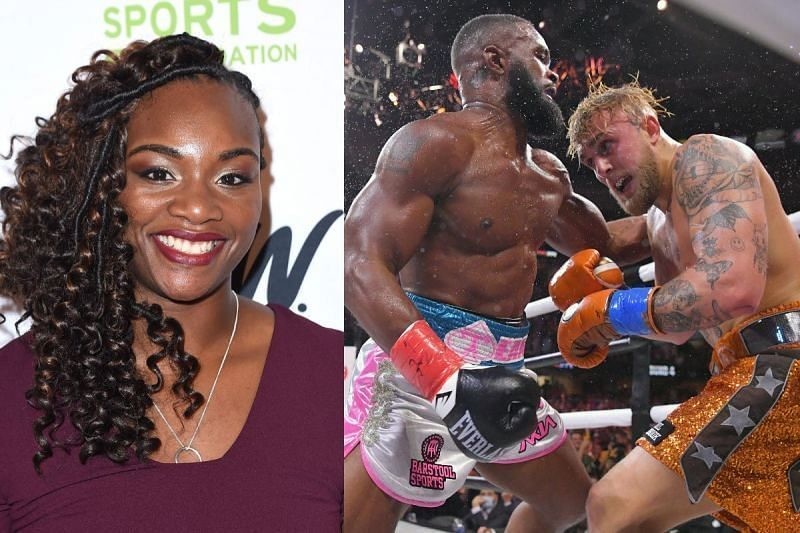 Jake Paul vs Tyron Woodley turned out to be a stellar fight as both the fighters raised the roof with their spectacular display of skills. However, Jake and Woodley were not able to act upon their prediction to secure a knockout win as the fight lasted for the complete 8 rounds. As a result, it was up to the judges to declare the winner and they scored the fight in favor of Jake Paul. Hence the Youtuber turned boxer won his 4th pro fight via split decision against Woodley.

Consequently, the result caused a huge uproar on the internet as many boxing fans and analysts claimed that Tyron Woodley should have won the fight. Similarly, the undisputed female lightweight champion Claressa Shields who was in attendance for the fight was unhappy by the decision.

As a result, in an interview after the fight, Claressa Shields slammed the decision of the judges by asserting that the Chosen One won the fight comfortably. “It wasn’t no close fight to me. I thought Tyron Woodley clearly won.” T-Rex also added that the Problem Child did not do anything good enough to be awarded a win.

In the same interview, Claressa Shields gave her thoughts about the performance of Jake Paul. According to her, the two fighters will get in the ring once again and she also revealed that Jake was declared as the winner from a purely business point of view.

“What the hell did Jake Paul do? Did he hurt Woodley? He ran around the ring. He backed up the whole time. He didn’t win the fight. But it’s a business. He bringing a lot of his fans. He’s doing a great thing for boxing. They’re gonna have a rematch. But Tyron Woodley definitely earned the win tonight in my eyes.”

Although it would have been unfair to give Woodley the win as he did not show enough activity in the majority of the fight. Moreover, Jake outpunched Tyron by a considerable margin in the contest. Hence it looks like the judges got the decision correct in this contest. Comment below if you think the judges made the right decision to score the contest in favor of Jake Paul.