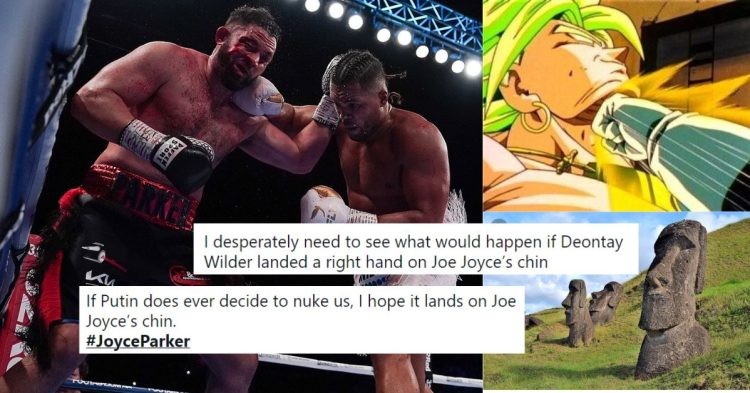 He is not called “Juggernaut” for no reason. Joe Joyce is as tough as they come. The former Olympic gold medalist sent the entire boxing world into a frenzy after a gritty 11-round war against Joseph Parker that saw him become not only the first boxer to hand a stoppage loss to the 30-year-old heavyweight, but also saw him capturing the interim WBO heavyweight title.

Joyce and Parker engaged in arguably one of the best heavyweight fights in recent times. Both the boxers put up a performance of a lifetime in what was a truly exciting match-up. After everything was said and done, it was Joe Joyce who emerged on top with a stoppage victory in the 11th round to extend his winning streak to fifteen straight wins.

However, Joe Joyce did not get his hand raised without his fair share of troubles. Parker connected some vicious shots on Joyce, landing clean on several occasions. Be that as it may, Joyce did not stop advancing and pressured Parker with his own power shots until he finally secured the victory.

The brutal exchange between both the boxers paved the way for some interesting comments on social media as the boxing world reacted in disbelief at Joe Joyce’s incredible toughness.

Joe Joyce calls himself the Juggernaut and rightfully so. Joyce is huge for a heavyweight boxer, as big as Tyson Fury. He carries incredible power, akin to even the likes of Deontay Wilder. And he has cardio for days, just like Oleksandr Usyk. Joyce is a mixture of some of the best that the division has to offer.

Fan reactions to Joyce’s toughness are definitely going to leave a smile on your face. A fan commented how he is desperate to watch Joyce and Wilder share the boxing ring, while another noted Joyce as legendary boxer George Foreman’s lovechild.

If Putin does ever decide to nuke us, I hope it lands on Joe Joyce’s chin. #JoyceParker

Joe Joyce is George Foreman’s lovechild. Pass it on.

Joe Joyce has a chin made of a material not that doesn’t even exist on this planet pic.twitter.com/Jv7zZcWRYA

Joe Joyce’s chin when it sees a right hook https://t.co/QcbrQDFRuW

Joe Joyce’s chin is just ridiculous. He doesn’t even flinch when he gets caught with big bombs.

How do you think Joe Joyce fares against the other power punchers in the division? Do you feel Joyce carries the same intensity against the likes of Deontay Wilder and Anthony Joshua among others?