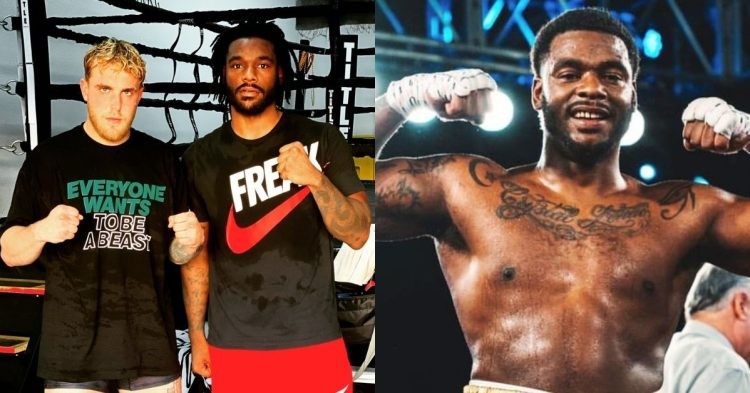 Jake Paul will now face a new opponent after Tommy Fury had to back out from their scheduled bout on August 6th due to visa issues. The Problem Child will make his return inside the ring against Hasim Rahman Jr.

This matchup is not officially confirmed by Jake yet. But according to various sources like Mirror and reporter Michael Benson Hasim Rahman Jr will most likely replace Fury and face Paul on short notice. Speaking about Jake’s reportedly new opponent, Hasim Rahman Jr’s is the son of retired boxer Hasim Rahman who was a heavyweight champion during his tenure.

Just like his father, Hasim Rahman Jr is also a heavyweight contender. The US heavyweight boxer has a record of 12-1 with six knockouts to his name. He has an impressive pro record but Gold Blooded’s recent fight didn’t go his way as he suffered a brutal stoppage loss against James Mckenzie back in April this year.

However, the heavyweight contender is looking for a quick turnaround against YouTube sensation Jake Paul. He seems confident about his chances against The Problem Child as Hasim had already offered an early prediction of how this matchup would end two years ago.

Gold blooded had predicted a first-round knockout win over the undefeated Jake Paul after they sparred with each other back in 2020.

Jake Paul’s new opponent Hasim Rahman Jr had helped The Problem Child during the initial stages of his professional boxing career. The two fighters that are set to collide against each other inside the boxing ring have sparred twice previously.

Hasim was roped in by Jake’s team before his professional boxing debut against Aneson Gib. The former heavyweight champion’s son trained with The Problem Child and assisted him in preparing for his bouts against Gib and Nate Robinson.

Despite the confidence of Hasim Rahman’s Jr after sparring with Jake, The Problem Child has evolved significantly and it was on display as he knocked out former UFC champion Tyron Woodley in the rematch.

In the end, it is needless to say that fans are unhappy after Tommy Fury’s withdrawal from the fight against Jake Paul for the second time. But this matchup would be very exciting to watch as well because of their history with each other as sparring partners.

Another reason to look forward would be the fact that Jake will be going against an experienced boxer with a good record. Do let us know in the comments section your thoughts regarding this matchup between Jake Paul and Hasim Rahman Jr.