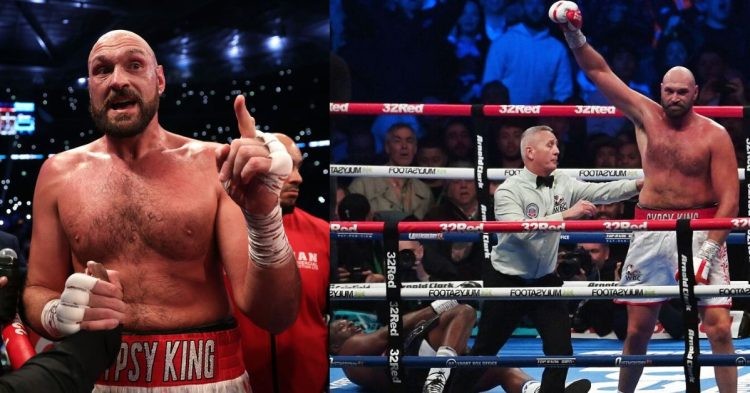 Heavyweight world champion Tyson Fury is seemingly coming out of retirement again to return to action inside the boxing ring. Throughout the years, ‘The Gypsy King’ has retired three times including the short-lived retirement after knocking out Dillian Whyte in April.

According to Fury, he could not walk away from the sport because he couldn’t let go like most great champions. In an interview, he explained that most of the champions can’t just hang up the gloves as boxing is a major part of their life.

In an interview with BT Sport, Fury said: “The only thing I can gain is money, so after this fight, I’ll have earned over £100million. If I can spend that, I don’t deserve any more, do I?”

“I live in Morecambe, in Lancashire. Its short-lived cheap there. I don’t have any big habits like I’m gambling tons of money away. I don’t do anything. I can never spend the money I’ve got.”

‘The Gypsy King’ is one of the most popular icons in the boxing world but despite accumulating a ton of money throughout the years, Fury lives a quiet and simple life with his family.

“I want to retire on top, unbeaten heavyweight champion of the world. I want to do a Netflix documentary, a Hollywood movie, and be a good husband, father, and son. Most of all I just want to be happy, and that’s probably the hardest thing,” Fury added.

Fury explained that he has more than enough money to spend and after achieving almost everything in the boxing world; he has little motivation to carry on. Instead, he intends to retire young and live a healthy life with his family.

Tyson Fury comes out of retirement to fight Derek Chisora

Tyson Fury last fought Dillian Whyte and after dominantly winning the bout, he decided to hang up the gloves. However, he has confirmed to come out of retirement to complete the trilogy with Derek Chisora.

Fury has also been tied to some blockbuster fights with heavyweight stars in the likes of Oleksandr Usyk, and Anthony Joshua, and even a super fight with UFC heavyweight champion Francis Ngannou. After his last fight with Whyte, he called out Ngannou and promised to fight him in a crossover fight.

But for now, ‘The Gypsy King’ is focused on his trilogy bout against Chisora. He already beat him twice and this time they will face each other for the third time at Tottenham Hotspur Stadium, London on 3rd December. Check out the video below where Fury explained why he is coming out of retirement:

Apart from this, Fury aims to fight Oleksandr Usyk (20-0) in an undisputed world title clash in early 2023. Usyk is coming off a rematch win over Anthony Joshua. As per the reports, an ongoing negotiation is going on between Fury and Usyk for an undisputed heavyweight championship and the match is most likely to happen in March.