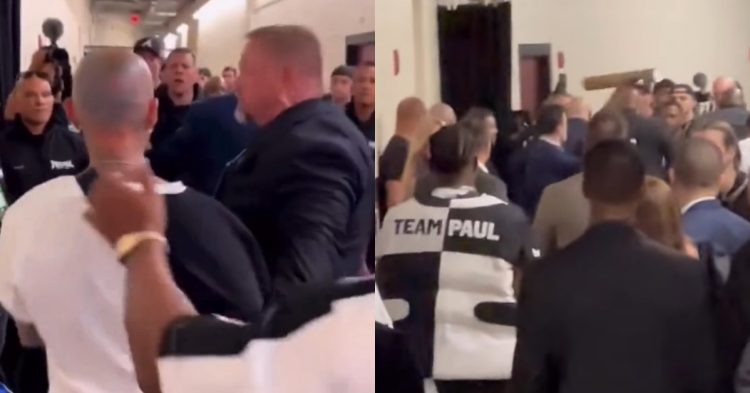 It looks like things got intense once Nate Diaz and Jake Paul’s teams came across each other. Jake Paul is fighting Anderson Silva in an 8-round bout in Phoenix, Arizona. Nate is there to support his teammate Chris Avila, who beat Doctor Mike in the undercard of the event.

Chris Avila earned a unanimous victory over Doctor Mike and Diaz was seen cheering on his friend. But Diaz’s mood changed from joyous to violent as he and his team ran into Team Paul backstage, during the event. A video of the incident surfaced online recently. While security was trying to keep the two teams apart, the respective crews were jawing at each other.

Not only that, drinks started flying as the altercation went on as well. Fans expected a bust-up between Jake Paul and Nate Diaz. There are rumours that The Problem Child will fight the 37-year-old after his bout against Anderson Silva. If anything, this recent scuffle just proved the fan theory that Nate and Jake are setting up a fight between them for the future.

Diaz is coming off a submission win against Tony Ferguson in the UFC 279 main event. Ahead of the fight, he was involved in a backstage brawl against Khamzat Chimaev. As a result, the promotion cancelled the pre-fight press conference. So an altercation was just waiting to happen between Nate and Jake, as there was some bad blood between the camps.

After his win against Ferguson, the former UFC fighter added that he wants to try out boxing. Nate basically confirmed his interest in the Jake Paul fight with the statement.

Jake Paul is slowly turning into a massive PPV seller in boxing. Despite not having a background in combat sports, Paul has turned himself into a credible boxer. Paul knocked out Tyron Woodley and Ben Askren in his last few fights. Both Woodley and Askren held MMA titles during their time in the sport. But the 25-year-old got rid of them with relative ease.

In comes Nate Diaz, who is amongst the biggest stars in Mixed Martial Arts at the moment. He is famous for his entertaining fights. Nate also has the reputation of having an iron chin. So seeing Jake and Nate go at it, in the boxing ring, will definitely be entertaining. The recent brawl just seems to have gotten the fans more excited about a fight between the two.

Just a business move from Nate. If Paul somehow beats Anderson he’ll likely call out Nate who won’t refuse the cheque since he left the UFC

WWE style setup. Diaz finally out of his shitty ufc deal. Setting up his big big cash match with Paul. Good for him honestly.

What do you think of Nate Diaz and Team Jake Paul brawling backstage? Let us know in the comments down below.