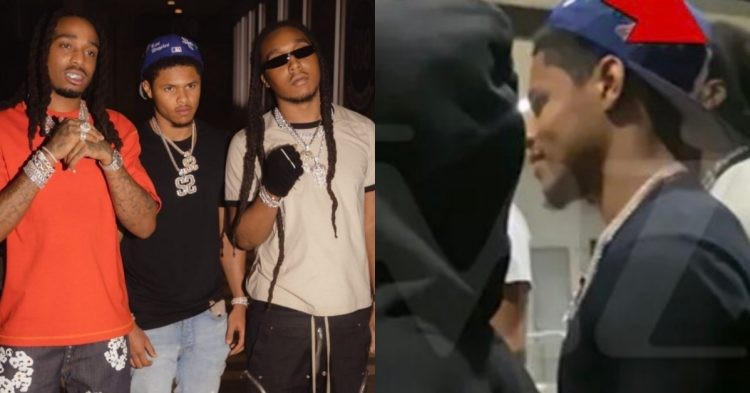 New footage emerges of the argument that led to Takeoff’s death. The Migos rapper died of a gunshot wound on November 1st. As per reports, the rapper was shot because of a heated exchange of words over a dice game. Other than Takeoff, another Migos member, Quavo was also present on the scene, along with boxing superstar Shakur Stevenson.

In a recently released video from TMZ, Takeoff and Shakur Stevenson were seen standing at a bowling alley in Huston. Quavo was arguing with some unidentified parties. Although the situation did not look too tense, gunshots suddenly started flying. Aside from Takeoff, the incident had two other victims as well. Fortunately, their injuries are not severe.

Shakur Stevenson, who was present at the spot, took to Twitter afterwards and mourned his friend’s death.

The 25-year-old Olympic medalist last fought on 23rd September earlier in the year. He beat Robson Conceicao decisively with a unanimous decision victory. After the bout, Shakur stated his intentions to move up in weight and fight for the undisputed lightweight titles next. Stevenson also expressed his interest in fighting William Zepeda recently.

Fans urge Shakur Stevenson to stay away from problematic situations

The Migos rapper, Takeoff was just 28 at the time of his death. His death points out how fickle life really is and things can go wrong at any point. The music industry is extremely saddened by the passing of this talented young artist. However, one person who was just inches away from the incident was Shakur Stevenson. He was standing right by the deceased rapper at the time of his death.

In the video, fans can hear several rounds of gunshots. Shakur can count himself extremely lucky that one of the shots did not hurt him gravely. Afterwards, fans requested Shakur to stay away from trouble such as this and were thankful that he came out unscathed from the harrowing incident.

Glad to hear you are finally tweeting champ. Are you ok? You shouldn’t be around that

Bruh this tweet could’ve easily been about you , gotta move to different circles fr fr , bullets don’t care if you a celeb or not , R.I.P takeoff 🙏🙏

Stay out the way champ bullets ain’t got no names

RIP. Was crazy hearing you were right next to him. The future of boxing could’ve also been taken away. Be safe.

Bro u need to be careful

Stevenson is a bright young prospect who has the better part of his career ahead of him. Hence, fans are rightfully worried about the company he keeps. However, he does not have an extensive history of getting involved in life-threatening situations. This incident will no doubt shake Shakur Stevenson up and make him more careful about choosing his friends in the future.

The boxer is engaged to musical artist Young Lyric and has a very young daughter, Leilani Asha Stevenson. By the looks of it, Shakur is a family man. During a previous altercation in a press conference, he dropped his championship belts on the floor and rushed to his mother’s aid. So there is no question about his love for his close ones. Perhaps he will avoid scenarios in the future where he is in danger of physical harm.