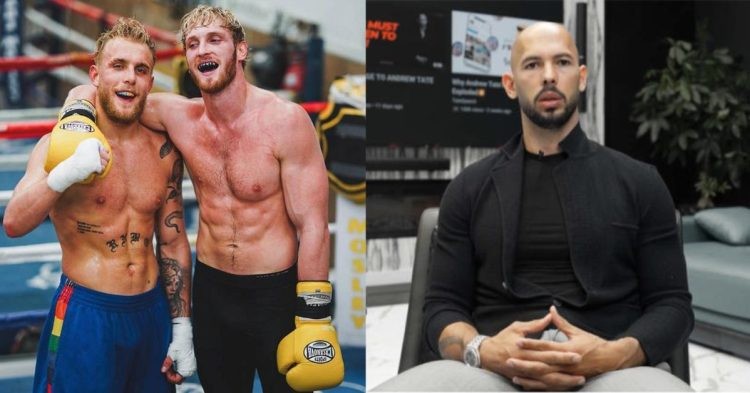 Jake Paul hits back at Andrew Tate after he called out Logan Paul (Credit: Twitter)

Controversial social media star Andrew Tate has again taken a jibe at Logan Paul – this time, for his friendships with his brother Jake’s rival, KSI. However, Jake was quick to defend his brother and sent a response to Tate in the most subtle manner.

Logan is friends with KSI and the two have launched an energy drink named Prime Hydration. Meanwhile, the rivalry between Jake and KSI is far from over. Recently, Tate called out Logan for his friendships with KSI and for not supporting his own brother.

Tate said, “why do you not support your own biological brother’s events the same way you support the man who insults him? This man INSULTS your BROTHER?”

“This is a crime against god. You turn on your own blood Logan, as you have turned on free speech and humanity as an agent of the matrix.”

Jake Paul almost immediately replied to Tate. He took to Twitter and wrote, “We are brothers. Blood. Nothing will ultimately come between us. And we will continue to make history.”

Some might think that Tate is gaslighting them and aiming to make the Paul brothers fight against each other. Recently, Jake also got into a heated altercation with Logan regarding his friendship with KSI. However, it looks like no matter what, nothing can break the bond between the two brothers.

Will Andrew Tate fight Jake Paul in a boxing match?

Andrew Tate and the Paul brothers have been going back and forth against each other on social media for quite some time now. ‘Top G’ has always been vocal about his problems with Logan; however, he stated that he has no issue with Jake. Tate also said that he respects ‘The Problem Child’ now that he has become a professional boxer.

Recently, Jake posted a video on his social media platform where he was seen facing off with Tate in a boxing ring, hinting at a possible boxing fight in the future. However, it is not clear when or if they will fight each other as Andrew’s brother Tristan stated that there is too much respect between both camps to fight.

On the other hand, Jake is building his name in the boxing world by beating notable MMA stars and legends like Anderson Silva and Tyron Woodley. While Logan is expected to make his boxing return sooner rather than later.

‘The Maverick’ currently competes in WWE and in a recent match he tore his knee ligaments. Logan was previously expected to fight in the undercard of KSI’s Misfits Boxing event in January. However, after his injury, he will have to pull out of the bout.

On the other hand, Tate is yet to make his comeback into combat sports. ‘Cobra’ is a former four times kickboxing champion and amassed a professional record of 76-9. Tate is expected to fight Jake the next year but also called out Logan saying that he will fight ‘The Maverick’ for free.