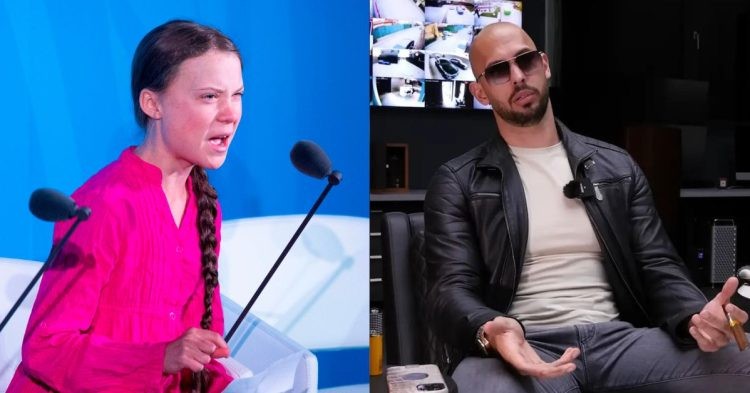 Andrew Tate and Greta Thunberg Rivalry: Who will get the last laugh? (Credits: Getty Images)

Internet sensation Andrew Tate is easily one of the most controversial figures on the internet. As such, the former kickboxing world champion also has many people that he does not get along with. Interestingly, this list also includes 20-year-old climate activist Greta Thunberg.

Whilst Tate’s Twitter feud with Greta Thunberg has seen a lot of traction on social media, little is known about its origins. The feud began when a clip was released from a Tate fan account, in reference to Greta. In the clip, Tate calls Greta a ‘bomboclat’ and declares that he is unwilling to listen to an ‘unattractive’ 16-year-old.

Tate believes that Greta is hypocritical, calling for people to reduce emissions whilst traveling the world on planes. The Top G insists that he does not listen to children and takes some more jibes at Greta, calling her “a flower that will never blossom.” Recently, this clip was released once again, in the aftermath of Tate’s arrest in Romania.

Following this clip, Tate also publicly Tweeted out at the 19-year-old bragging about his 33 cars. This time Greta swiftly replied, “yes, please do enlighten me. email me at [email protected]” Moreover, the tweet saw a hail of positive responses in support of the teenage climate activist.

Further, this back and forth continued a little bit further with the final nail in the coffin being Greta’s response to Andrew’s arrest in Romania. On December 29, Andrew along with his brother and others were detained for a 30-day period. Reports indicate, that the Top G may face 15-20 years in prison if found guilty.

Prior to Andrew’s arrest on grounds of human trafficking, r*pe, and organized crime, he posted a response video. In the video, Tate is seen with pizza boxes, which some people thought played a role in the Romanian authorities finding him. Although the pizza boxes were inconsequential, they did make for a banger tweet by Greta.

Not just Rogan, but also many other high-profile celebrities and even some of the Top G’s fans online believe that Tate’s comments were in poor taste. As a result, a large majority is actually rooting for Tate to be found guilty and imprisoned for life.

Currently, Tate remains in an undisclosed detention center in Romania until investigations continue. After a 30-day detention, we will know more about the case and whether the Top G is guilty or not.

This leaves the question, do you think Andrew should have started beef with Greta? Will the Tate-Thunberg rivalry reignite after his release? Leave your thoughts in the comments below.