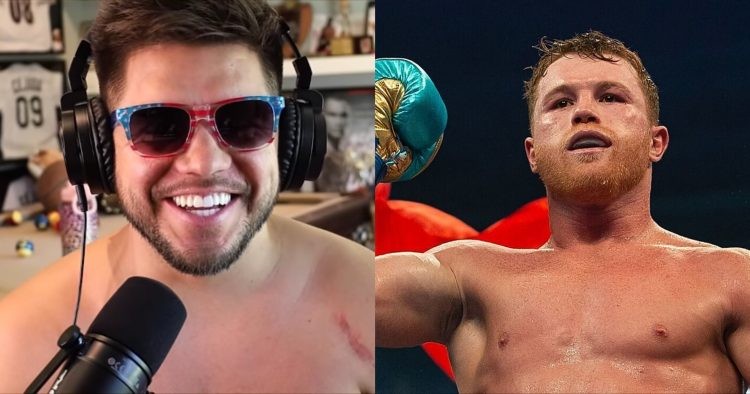 Henry Cejudo does not think Canelo Alvarez is the no. 1 pound for pound fighter in the world! The former UFC bantamweight champion has named Terence Crawford as his pound for pound king. While Bud Crawford got the no. 1 ranking, Cejudo ranked Canelo in second place.

The rest of his top 5 included Oleksandr Usyk, Vasiliy Lomachenko and Gervonta Davis. He explained his reasons for putting Usyk ahead of Tyson Fury. Cejudo revealed that Oleksandr has the better overall CV and his victory over Anthony Joshua pushes him ahead of Fury. Tank Davis just knocked out Rolando Romero past weekend. Hence, his inclusion makes sense.

However, it may come as a surprise to see Cejudo not giving Canelo the top stop. They recently appeared together on Mike Tyson’s Hotboxing podcast. But Canelo recently lost to Dmitry Bivol for the WBA (Super) Light-Heavyweight Championship. Canelo has a fight coming up against GGG. Hence, he will have an opportunity to redeem himself and climb up the rankings pretty soon.

During the latest episode of his podcast with The Schmo called ‘Triple C and Schmo‘, Henry Cejudo weighed in on the upcoming trilogy bout between Canelo Alvarez and Gennadiy Golovkin. They are scheduled to fight on September 17th of this year. While the first bout was a draw, Canelo won the second bout via judges’ decision.

However, the fans wholeheartedly disagreed with both the outcomes and thought Golovkin won both fights handily. As a result, fans are clamouring to know what the outcome will be the third time around. Triple C spoke on the matter and gave the edge to Canelo. However, he is not counting out GGG.

“I think Triple G kind of having that chip on his shoulder from losing to him (Canelo) and seeing what Bivol did, there’s a game plan set in place.”

“I think Triple G s going to be a lot more defensive in this fight and really kinda pick his shots with Canelo. Obviously, I’m going for Canelo, I want Canelo to win, But man, I wouldn’t count GGG out. I really wouldn’t.”

It seems as if the interest in the trilogy fight has gone up significantly following Canelo’s loss to Bivol. Previously, the public consensus was the Mexican will blow GGG away if they ever fought again. Canelo was on a dream run before running into Bivol. After that loss, the illusion of Canelo being unbeatable. As a result, a lot of fans now think GGG can pull off the upset.

Who do you think wins the fight? Can GGG finally avenge his loss to Canelo? Or will Canelo has GGG’s number? Let us know your pick in the comments down below.