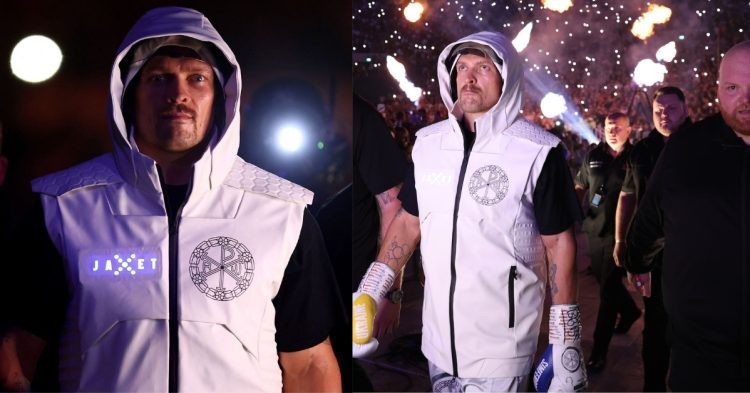 Oleksandr Usyk is unarguably one of the greatest boxers that the world has ever seen. The Ukrainian boxer has won world titles in two different weight classes and is also an Olympic gold medalist after winning the glory back in the 2012 London Olympics.

The Cat has a perfect record of 19-0 out of which he has finished 13 of his opponents. In his professional boxing career, the Ukrainian boxer has defeated big names like Derek Chisora, Anthony Joshua, Tony Bellew and many others.

Moreover, Usyk was the first undisputed cruiserweight champion as held all four titles from 2018-2019. Thereafter Oleksandr Usyk moved up a weight class and showed his dominance in the heavyweight division.

He outclassed Anthony Joshua throughout the twelve rounds and became the new unified heavyweight champion back in September 2021. This goes to show the greatness and legacy of the Ukrainian fighter in this sport. However, let’s shift the focus from his pro boxing achievements and take a look at his walkout songs.

Unlike other boxers who like to mix it up with their song choices for their ring walk, Oleksandr Usyk has walked out to the same song for almost every single fight of his professional boxing career. The Cat walks out to the tunes of the popular Ukrainian song “Brothers” which is composed by singer Vasily Zhadan.

The Ukrainian heavyweight champion has used this song for his stunning ring walk against Anthony Joshua where he made his way to the arena wearing a unique outfit. It is needless to say that the entire Tottenham arena was buzzing to the tunes of the high-beat Ukrainian song and many were impressed with his choice of ring costume.

Consequently, we can expect yet another stunning ringwalk from Oleksandr Usyk as he’ll enters the jam packed arena to defend his unified heavyweight titles against Anthony Joshua. However, the likelihood of him changing his walkout song is very low as the Cat loves the Brothers song by Vasily.

Do let us know in the comments section below your thoughts on Oleksandr Usyk’s walkout song.