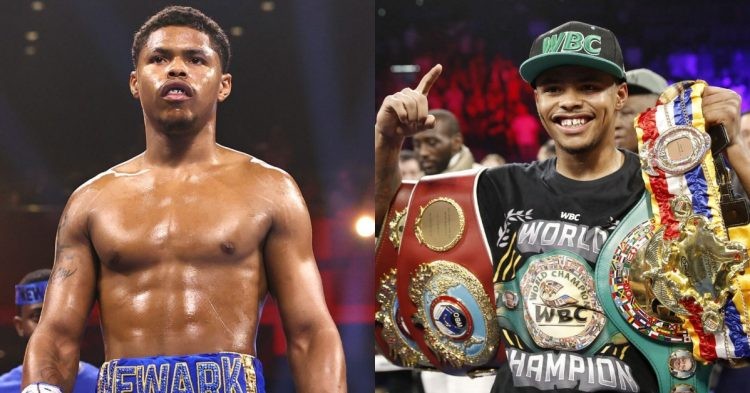 Shakur Stevenson will go up against Robson Conceicao on September 23rd inside the Prudential Center Area in New Jersey. The fight will have the WBC, WBO and The Ring super featherweight titles on the line. However, it will only be for Robson as the champ, Shakur, missed weight by 1.6lbs. He confirmed that he would indeed move up in weight after the fight.

The 24-year-old was always destined for glory. In 2014, he won the top prizes in Youth World Championships and Youth Olympic Games in the flyweight division. Two years later, in 2016, he took part in the Rio de Janeiro summer Olympics as a bantamweight and went on to win the silver medal in the competition. Hence, it was clear he was a talent to keep an eye on.

In the following year, 2017, Stevenson made his pro-debut in a 6-round clash against Edgar Brito. Shakur is yet to taste defeat (18-0) in his career and has won world titles across two separate weight classes. His accolades in his pro career include IBF Intercontinental and WBC Continental featherweight titles. He also became the WBO featherweight champ in 2019.

Against Jamel Herrig in 2021, Shakur became the WBO super featherweight champ. He also grabbed The Ring and WBC super featherweight titles against Oscar Valdez on April 30th of 2022. But, how much money has the fighter earned throughout this young career so far? Let’s find out.

How much money has Shakur Stevenson earned throughout his pro boxing career?

Athletes in the world of combat sports start off with a very small amount of compensation. So was the case with Shakur Stevenson who earned $10 thousand each for his respective fights against Aelio Mesquita, Roxberg Patrick Riley and Carlos Ruiz. However, his salary started improving after his fight against Viorel Simion, who Stevenson beat via first-round TKO.

For the fight against Simion, Shakur earned a reported $25,000. He had another upgrade to his pay for his fights against Jessie Cris Rosales and Christopher Diaz. He earned $50 thousand each for the two fights respectively. Then came the first six-figure payday of his career against Alberto Guevara as he earned $100,000 for the the fight.

He then fought Joet Gonzalez for the vacant WBO featherweight title. He won the bout via unanimous decision and Shakur also earned $150,000 for the bout. In his next fight against Felix Caraballo Stevenson bagged $450,000, while he earned $1.7 million to beat Jamel Herrig. (figures via SportsZion)

According to Total Sportal, Shakur Stevenson earned a base salary of $500,000 to fight Oscar Valdez. But, his total payout was expected to be $1 million including the PPV shares. So, it looks like Shakur has earned an estimated total of $3.5 million throughout his fighting career so far.