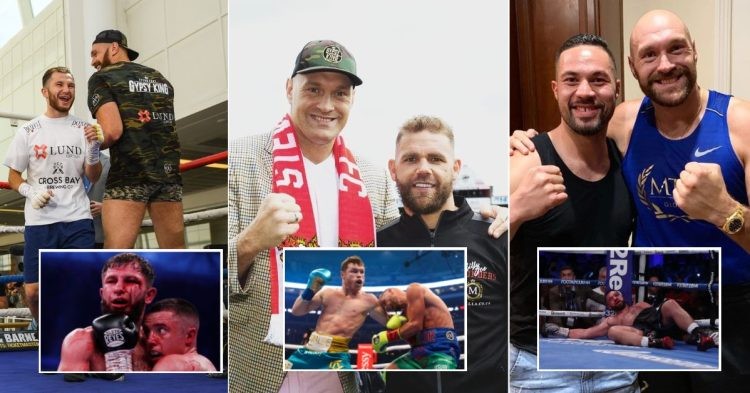 Tyson Fury is the Gypsy King but seems like fans are associating another nickname with the boxing heavyweight after Joseph Parker’s brutal stoppage loss against Joe Joyce this past weekend.

Joe Joyce and Joseph Parker shared the boxing ring for the interim WBO heavyweight championship and what followed was a gritty war between both the heavyweight stalwarts who put up a performance of a lifetime in front of thousands of fans gathered inside AO Arena in Manchester, England.

Joseph Parker trained alongside Tyson Fury for the much-anticipated fight, and the Gypsy King was convinced he would get the job done against Joyce. However, when it all went down, that wasn’t the case. On the contrary, Parker suffered the first loss of his professional boxing career.

Immediately after the fight, Fury interacted with the media and shared his thoughts on the bout. Fury had high praise for Joyce, all the while crediting Parker for his valiant effort, and rightfully so.

This wasn’t the first time Fury had to be on the losing end in a fight involving his friend. In the past, Tyson Fury has been ringside for several other bouts and the outcome has always been the same. Whenever Fury is ringside supporting his friend, the fight almost always ends in a knockout loss.

Tyson Fury is no longer the Gypsy King, fans call him the “Jinxy King”

Fans were quick to notice the pattern, awarding him with the moniker, “The Jinxy King.” And it’s hard not to agree with this fan theory.

people love to hate on others willing to chase there dreams, @bjsaunders_ tried to be great last night! it wasn’t his night but at least he had the bottle to follow his dreams & heart ❤️, he will always be my bro 😎 we go back to 15/16, what a night to remember in #30years dallas pic.twitter.com/sOVMRsBFyU

However, as it turned out, Billy Joe Saunders suffered the first loss of his professional boxing career and it came via stoppage in the eighth round. That’s not all, Fury was present ringside to support rising featherweight, Issac Lowe, who also suffered a stoppage loss in his last fight against Nick Ball which took place earlier this year against Nick Ball.

Nathan Gorman also succumbed to the first loss of his professional boxing career after suffering a KO loss against Daniel Dubois as Tyson Fury sat ringside in support of his friend. There are far too many examples that prove Gypsy King might just be turning into the “Jinxy King”.