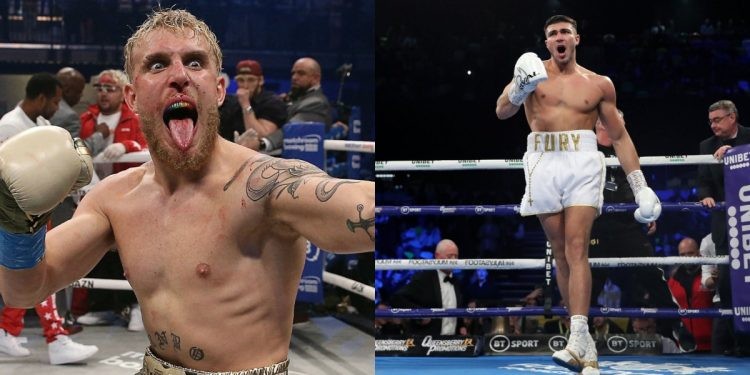 The incredible musical chairs for who is going to be the next opponent for Jake Paul continues! First, he was in talks to fight Mike Tyson. Then came UFC superstar Nate Diaz. But now it seems like the position has gone back to his old rival Tommy Fury.

Jake Paul and Tommy Fury had an intense verbal rivalry in late December. They were originally set to fight on December 18th of 2021. Although the stage was set for them to put on a show for the audience, Fury was forced out of the fight due to an injury. Jake took on Tyron Woodley instead and knocked him out to extend his winning streak to 5 fights.

However, it seems like the Fury fight will finally take on August this year. But nothing is straightforward in a Jake Paul fight. So is the case with the bout as well. After seemingly agreeing to fight on August 6th in the Madison Square Garden arena, Paul alleged that Tommy wanted to back out of the fight.

The Problem Child also pointed out that he agreed to all the conditions that were required from Tommy’s side. He tweeted,

Tommy Fury, you pulled out last year. Then you agree to fight me now but your dad is trying to pull you out again?

We’ve given you everything you asked for

But the half-brother of heavyweight boxing champion Tyson Fury denied Jake’s claims about him wanting to pull out of the fight. Unlike Jake, Tommy did not have a long response, he just confirmed the date of the fight and promised to meet Jake in the middle of the ring. He wrote,

Currently, there is a combat sports event scheduled for August 6th inside the Madison Square Garden arena. The card is set to feature Jake Paul and his client Amanda Serrano in the main event spots. However, there has not been any indication as to who the 25-year-old may fight next.

As mentioned before, Mike Tyson, Nate Diaz and Tommy Fury are all in the running to take up the spot against Jake. Although nothing has been announced officially, from the recent exchange between Jake and Tommy, it seems like the former Love Island contestant Tommy Fury is the most likely opponent for Jake Paul to face.

Actually we are scheduled to be in New York next week for the kick off press conference and I’m not your pal, buddy. https://t.co/I2r0wZAN6Q

After being unable to fight Jake last year, Fury comeback this year against Daniel Bocianski on the Tyson Fury vs Dillian Whyte card. After emerging victorious in the bout, Tommy seems like he is ready to revisit the Jake Paul saga and put an end to it once and for all!