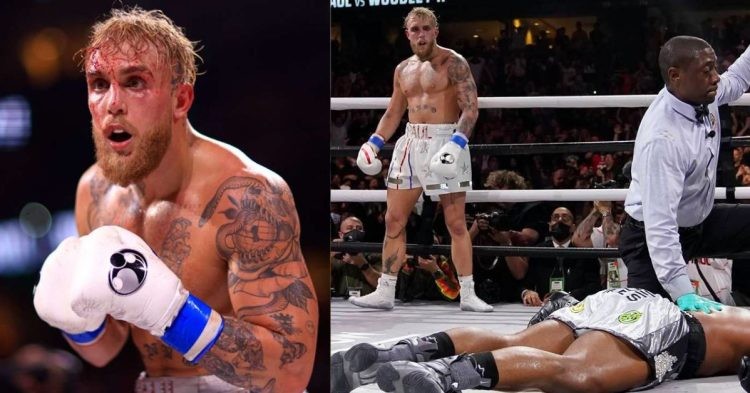 The most talked about name in the sport of boxing in recent times, “The Problem Child” Jake Paul is all set to face one of the greatest MMA fighters of all time Anderson Silva on October 29th.

When Jake Paul first broke into the scene of boxing, not many would have imagined him succeeding the way he has up until now. Paul holds a 5-0 professional record, fighting three times in 2021. Although Paul is yet to step inside the ring this year, he was scheduled to fight Tommy Fury and Hasim Rahman Jr. but both fights fell off at the last moment due to various reasons.

The YouTube kid, as many like to call him has knocked out four of the five opponents he has faced including former UFC welterweight champ Tyron Woodley. But does his hype match the skills? Time will tell, as Paul is yet to step inside the ring against a real professional boxer. Though, a 47-year-old retired MMA fighter that’s way out of his prime, Anderson Silva is by far the biggest threat Paul will face.

Paul has only been in the fighting world for the last three years but has made some significant improvements in such a short time. He sometimes certainly doesn’t get the credit he deserves, hence this fight against Anderson Silva could earn him the credit and respect he deserves if somehow he is able to defeat ‘The Spider’ Anderson Silva.

“I need to improve my skills, I need to stay in the gym for 2 or 3 years and I can share the ring with Canelo Alvarez. I think I can beat him, I still think Canelo and I is one of the greatest fights ever in boxing. I know I could beat him. People laugh at that, but Dmitry Bivol proved that he is very beatable and I have a similar style, reach, speed and power to Bivol.” This is what Jake Paul had to say about his willingness to fight the current middleweight king of boxing Canelo Alvarez.

To date, Paul has fought a YouTuber, an ex-basketball player, and two retired MMA fighters who specialized in grappling and wrestling. Although Paul did his job by knocking both of them out. But claiming that he can beat boxers with experience, let alone a top-ranked boxer seems to be too big a leap right now.

He still hasn’t been tested against a real and fair opponent. Only time will tell whether he can make it to the top of the boxing world or not.