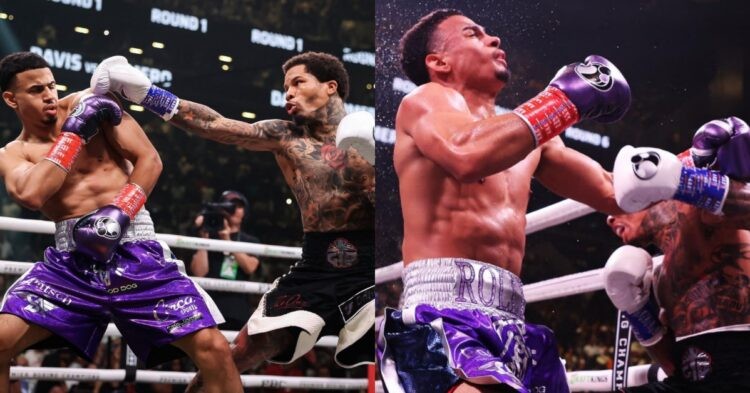 Gervonta Davis knocks Rolando Romero out in the sixth round. (Images via Twitter)

Tank just did what he does the best! Gervonta Davis just knocked out Rolando Romero to defend his WBA (Regular) Lightweight championship. Although Davis was an overwhelming favourite to win the match, the fans wondered whether an upset was on the cards or not.

The bout began with Romero taking the initiative to walk Gervonta down. Davis was respectful of Rollie‘s power and took a very cautious approach to the fight. Rolando certainly had his moments during the contest while it lasted. From round 3 onwards, Davis truly started to come out of his shell and started moving the way he is famous for.

The contest ended at the 2:39 mark of the 6th round. By then Gervonta was in his element and he lured Rollie into a corner. Gervonta knew exactly what he was doing as that sequence was the beginning of the end for the 26-year-old. In trying to land hard shots, Romero kept himself open and swung for the fences. Taking advantage of that, Davis landed a picture-perfect left hook which put Romero down.

The ringside angle of the @Gervontaa KO punch is incredible 😲 #DavisRomero

The referee gave Rolando all the chance to recover and get back into the fight. But Tank is known for his enormous power which almost disables his opponents momentarily. Rollie was no different as he struggled to get back on his feet. The ref ultimately called the fight which resulted in Davis retaining his WBA belt.

What is next for Gervonta Davis following his KO win over Rolando Romero?

In his last fight, Gervonta Davis was unable to finish Isaac Cruz. It begged the question of whether Davis’ power was over-hyped or not. But he put all the discussions to bed as he knocked out a much bigger opponent in Rolando Romero. So now the question is, what is next for Tank after this dominant win?

Ahead of the fight, Davis already announced that he is leaving Floyd Mayweather’s promotion ‘Mayweather Promotions.’ He feels as if leaving the promotion will open up the doors for him to fight much better quality opponents.

One name that jumps at the very beginning of the queue is Ryan Gracia. Both have expressed their interest in the fight. After tonight’s performance, the excitement for the bout between Davis and Gracia would be astronomical.