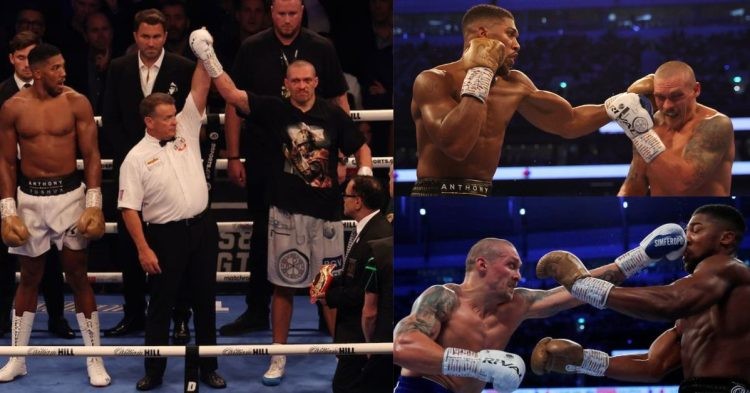 Anthony Joshua squared off against Oleksandr Usyk in a twelve-round heavyweight bout that took place at the Tottenham Hotspur stadium in London back in September 2021. The British boxer’s WBA, IBF, WBO and IBO heavyweight titles were at stake in this highly anticipated bout.

Everyone was expecting AJ to overpower Usyk and defend his unified heavyweight title status with the help of his height and weight advantage. However, the former undisputed cruiserweight champion shocked the world by outclassing Joshua throughout the twelve rounds and picked up a unanimous decision win.

With this win, Usyk became the new unified heavyweight champion. As we move ahead let’s take a look at the judges’ scorecard and analysis of how the fight played out between Joshua and Usyk.

Scorecard and Analysis of the Anthony Joshua vs Oleksandr Usyk fight

Both the heavyweights, Anthony Joshua and Oleksandr Usyk started the fight by trading jabs. However, it was the Ukrainian southpaw who was more successful in landing those punches as he evaded Joshua’s jabs with his head movement and countered it with many good strikes.

Usyk continued on his good momentum and outstriked Joshua in the second round and got into a nice rhythm. Subsequently, He used his speed and landed a good combination to stun AJ in the third round and asserted dominance in the fight.

However, Anthony Joshua bounced back in the fifth and sixth rounds of the fight as he caught Usyk with big shots. As soon as it looked like the British heavyweight was making a comeback in the fight, Usyk went back to landing jabs from a distance and regained momentum.

However, it was the Ukrainian southpaw who went aggressive and landed a barrage of punches in the championship rounds. In the final round, Usyk almost finished Joshua with a brilliant hook and uppercut. AJ somehow managed to stay on his feet and survived Usyk’s onslaught.

By the end of the fight it was clear who the winner was as Uysk had dominated Joshua in the first three rounds and the final four rounds of the bout. Subsequently, the judges scored the contest 117-112, 116-112 and 115-113 in favour of Oleksandr Usyk and the Ukrainian heavyweight was crowned as the new unified heavyweight champion.