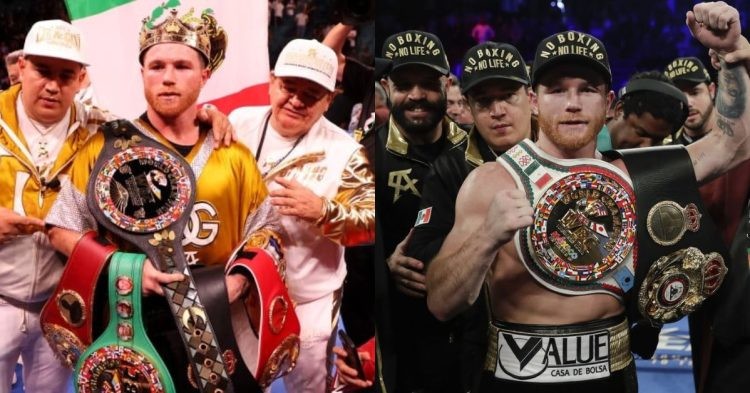 Saul Canelo Alvarez has established his name as one of the greatest boxers to have ever stepped inside the ring. The Mexican boxer has won multiple championship belts in four weight classes and is currently the undisputed super middleweight champion of the world.

More interestingly, he is the first and only boxer to have held all four titles in the super middleweight division. Saul has outclassed many big names like Shane Mosley, Gennadiy Golovkin, Amir Khan and many others in his glorious seventeen years of professional boxing career.

Consequently, Alvarez has amassed a stunning record of 57-2-2 which includes 37 wins via knockouts. This goes to show his greatness in the sport of boxing and there is no stopping the Mexican boxer as he wants to achieve bigger things in the sport and solidify his stature.

Apart from his highly impressive boxing career, Saul Alvarez’s unique nickname Canelo has struck a chord with the fans and subsequently, he is popularly known by his alias all around the world. As we move ahead, let’s take a look at the meaning and reason behind Saul’s nickname.

Meaning and Story behind the nickname of Saul Alvarez – ‘Canelo’

As mentioned above, Canelo is the Mexican’s nickname and his real name is read as Santos Saul Alvarez Barragan. The 32-year-old Mexican boxer received this nickname when he was very young and the reason behind getting this alias was due to his appearance.

Saul Alvarez began his boxing training under the guidance of Eddy Reynoso in his childhood days. Subsequently, when he was 12 years old, the popular boxing trainer decided to call him Canelito which means ‘Little Cinnamon’. Canelo is a shortened form of Spanish world Canelito and his trainer Eddy Reynoso gave him this nickname due to his ginger coloured hair and pale skin.

Interestingly, it was Saul’s trainer Eddy who also shortened the nickname Canelito and changed it into Canelo. Ever since the Mexican world champion received this alias, people all around the globe call him Canelo.