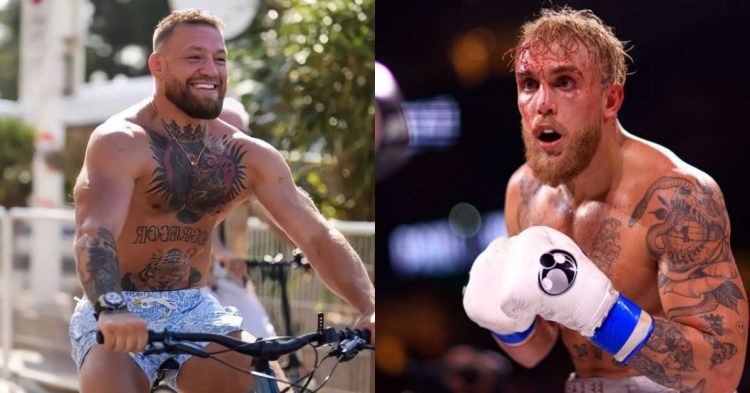 Conor McGregor finally opens up on fighting Jake Paul in a boxing ring. The Problem Child recently appeared on The MMA Hour hosted by Ariel Helwani. While promoting his upcoming boxing match against Hasim Rahman Jr, Paul spoke about fighting Conor McGregor down the line. He stated that there is potential for big business to be done.

The 25-year-old decided to turn pro in January of 2022. Since then, Paul has turned himself into a sensation with a record of 5-0. In his last fight, Paul earned the most significant victory of his career so far by knocking out Tyron Woodley. In their first encounter, Woodley pushed Jake to the limit. Paul only managed to sneak out a split decision win after almost getting finished by Tyron.

But he proved all of his doubters wrong in their second encounter by flatlining Woodley. However, the fanfare was not there for the rematch. While the first bout reportedly sold somewhere between 480,000 to 500,000 PPVs, the rematch was a massive letdown from a business point of view. According to reports, it did not even break 100,000 PPV buys. Conor McGregor pointed that out in the response to Jake’s call out.

He then followed it up with another tweet where he called Jake a “nobody.”

You are a flop, kid. A nobody.

Conor McGregor wants to win a world title in boxing

Jake Paul had previously issued multiple call-outs to Conor McGregor in the hopes to secure a boxing match. If his last outing is any indication, Jake is losing his ability to generate PPV buys.

But Conor never really seemed into the idea of giving Paul the opportunity to step into the ring with him. Instead, McGregor has always maintained that he’d much rather fight a proper boxer.

The Notorious One created history in 2017 when he took on Floyd Mayweather in a boxing match. Although the fight did not have a title on the line, it sold 4.3 million PPVs. McGregor was in deep negotiations to fight Manny Pacquiao in 2021. But his loss to Dustin Poirier at UFC 257 made the fight fall through eventually.

However, McGregor’s wish to jump into a boxing match is still very much in the realm of possibility. Even recently, Conor seemingly ‘agreed’ to a rematch against Floyd. Hence, it is clear that the urge to become a boxing champ is still very much present in Conor.

Ahead of his return against Donald Cerrone at UFC 246, The 33-year-old had a sit-down interview with Ariel Helwani. During the conversation in 2020, Conor stated that he’d like to win a boxing world title before his career is over.

What do you make of Conor’s response to Jake? Do you think he still wants a boxing title under his belt before he hangs up his gloves? Let us know in the comments down below.