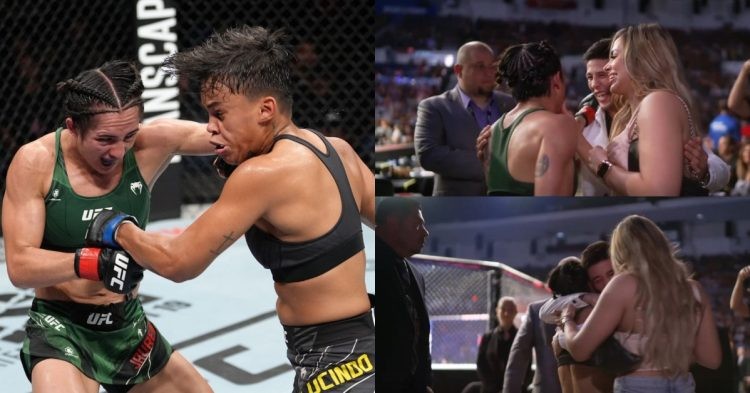 What a debut performance🔥

However, Lucindo landed the more powerful strikes in the fight. Her punches seemed to have significantly more pop than Yazmin’s. But the judges rewarded the volume punching more than Lucindo’s power punches. While two judges had the fight 29-28, one judge scored the fight 30-27, all in favour of the 23-year-old.

Brandon Moreno, who was in attendance for the fight, celebrated with Yazmin after the fight. Moreno was a training partner with Jauregui at Entram gym before his exit to train at Glory MMA & Fitness.

Brandon Moreno stated in an interview with MMA Junkie that Yazmin Jauregui will definitely be a champion in the UFC. Although Moreno did not claim that she will become a champ right away, The Assassin Baby does see her winning the UFC belt at some point in her career.

“I don’t say this about many fighters, and I love all my training partners, and I know how hard they work and how far they can go, but I promise you that Yazmin has what it takes to be a champion… I see it. Like I once said, ‘Maybe not today, maybe not in the near future,’ but I see her as champion.” (h/t via MMA Junkie)

From what she showed at UFC San Diego, Moreno’s claims do not seem that far-fetched. Much like the elite fighters in the 115lbs division in the UFC, Yazmin is extremely durable with a rock-solid chin. On top of that, she is extremely mobile inside the Octagon, which will help her immensely as she proceeds with her UFC career.

Mexico already had a UFC champ in Brandon Moreno. Similar to Moreno, Yazmin also possesses the same grit and passion for the sport. If she can win the UFC championship in future, then Mexico surely has found another breakout star.