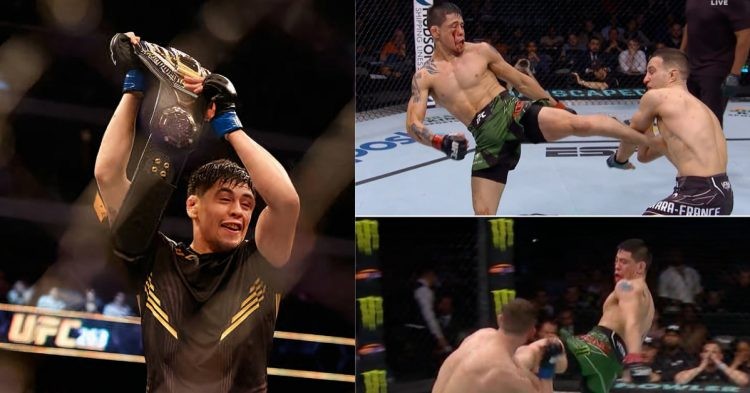 Brandon Moreno squared off against rival Kai Kara France in a highly anticipated five-round UFC 277 co-main event clash that took place at the packed T-Mobile Arena in Las Vegas. Subsequently, there was a lot at stake as the UFC interim flyweight title was up for grabs for both these contenders and a guaranteed undisputed title shot against Deiveson Figueiredo in the future.

Interestingly, this wasn’t the first time that the two flyweights fought against each other as they crossed paths back once in 2019. In that matchup, The Baby Assassin emerged triumphant as he outclassed Kai Kara France in a three round striking battle.

It is needless to say that this was a great opportunity for the Kiwi flyweight to avenge his loss in the rematch as he was riding high on confidence on the back of a three-fight winning streak. Meanwhile, Moreno is stepping back inside the octagon after an extended layoff as he last fought against Figueiredo at UFC 270 where he failed to defend his flyweight title.

There was a lot of high expectations from this rematch as both Brandon Moreno and Kai Kara France are highly skilled and two of the most exciting fighters in the 125-pound division. This fight didn’t contain a lot of action, but it was a very technical fight with high level of striking on display.

In the first round of the bout, both the fighters treaded cautiously and waited for the right opportunity to land some good strikes. They traded few good shots but there wasn’t a lot of striking exchanges and in the final minutes of the round, Moreno attempted a takedown.

However, Kai Kara France managed to successfully get out of the Mexican flyweight’s grab. The fight continued at a similar pace but Kai Kara France peppered Brandon Moreno with some good leg kicks.

The New Zealander carried the same momentum in the third round and bust open a cut after landing some good shots from the top position. However, Moreno managed to comeback in stunning fashion as he constantly pressurised Kai Kara France aggressively and dropped him with a powerful kick to the stomach.

Thereafter The Assassin Baby finished the fight by landing some nasty ground and pound strikes and the referee Herb Dean had to stop the fight. With this stoppage win at UFC 277, Moreno has won the interim title and will now compete for the fourth time against Deiveson Figueiredo.

“That Was a Bad Stoppage”- Daniel Cormier, Francis Ngannou Frustrated With Referee After Early Stoppage in Derrick Lewis vs Sergei Pavlovich at UFC 277