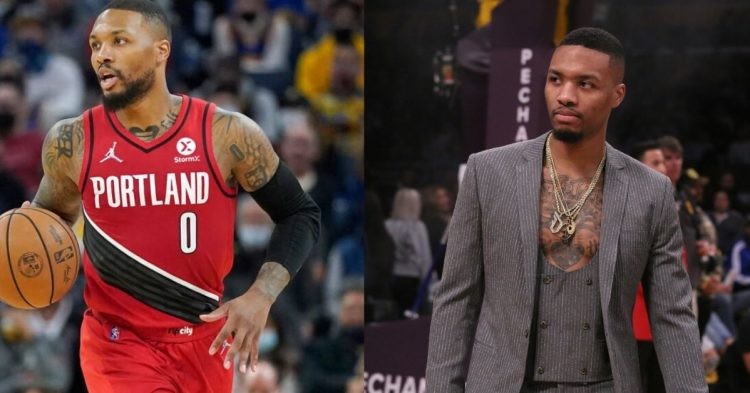 Damian Lillard on the court and in a suit (Credit- Twitter)

Damian Lillard is the star point guard for the Portland Trail Blazers. He has made the franchise relevant and carried it deep into the NBA postseason in the past. His ability to score the basketball from long distances rivals that of Stephen Curry and Trae Young. Reports show that Dame might have earned a whopping $450 million dollars through the NBA by 2027.

By age 36 Dame will have made $451 million from NBA contracts alone, won a gold medal, and made the NBA top 75 list. At that point, fuck a ring.

This is no small amount. Dame is expected to earn around 61 million dollars next year. One could argue that it is more than what some NBA players make throughout their whole careers. Therefore, it is important to understand how Lillard has been able to achieve this.

The NBA is a competitive business. Small market franchises are always looking to find a league-altering talent. That is exactly what Lillard has proven to be throughout his career. His nicknames such as “Dame Time” and “Logo Lillard” represent his clutchness or late-game shotmaking ability. Additionally, he has been loyal to the Portland Trail Blazers and has never switched teams.

This is a trait that few NBA superstars show in modern times. Each player is desperate to remain competitive and could potentially request a trade to get out of any unfavorable situation. However, Dame has yet to do this and this has led the Trail Blazers to pay him huge amounts of money to make him stay there.

One must wonder how Dame already crossed $450 million in his career earnings. In order to understand how this is possible, it is important to look at the total earnings of all his NBA contracts so far

The above table explains how Lillard has managed to earn this much in his career. This refers to only his NBA earnings and not any endorsements, investments, or off-court earnings. Dame also signed new contracts and extensions, even before the previous one had expired. This shows significant loyalty to the franchise that drafted him a decade ago. He has been rewarded fittingly for his commitment to his team.