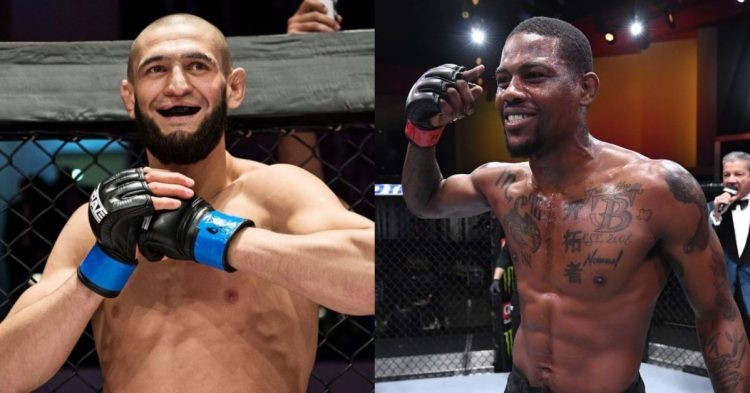 The UFC suffered a big blow after Khamzat Chimaev missed weight by a whopping margin of 7.5 lbs ahead of his upcoming UFC 279 main event bout against Nate Diaz. With Nate Diaz not interested to fight Chimaev at catchweight, the fight was bound to get cancelled.

The Stockton Slugger only wanted to fight Tony Ferguson and the promotion was in jeopardy of losing the main event fight. As per a recent report, it is official that Khamzat Chimaev is still on the card and he will square off against Kevin Holland in a five-round bout that will take place in the co-main event of UFC 279.

This also means we might be getting Khamzat Chimaev vs. Kevin Holland: Chimaev weighed in at 178.5, the Holland-Daniel Rodriguez fight was supposed to be at 180-pounds #UFC279 https://t.co/7DAIs0rtE1

Given their physical altercation backstage ahead of the pre-fight press conference and their back and forth over the past few days, this fight made the most sense. Moreover, with Holland supposed to fight Rodriguez at a catchweight limit of 179 pounds, this matchup fits the bill perfectly.

Dana White recently made an appearance on Sportscenter and announced the new fights for UFC 279.

In the main event, now Nate Diaz takes on Tony Ferguson in a 5 round welterweight bout.

On the other hand, Khamzat Chimaev takes on Kevin Holland in a 5 round co-main event. Both fighters were involved in a brawl leading upto UFC 279 and now they will get an opportunity to settle their beef inside the octagon.

Besides that, Li Jingliang now takes on Daniel Rodriguez in the features fight of UFC 279.

Following Khamzat Chimaev missing weight one night ahead of UFC 279, fight fans and fighters around the globe criticized him and called him unprofessional. However, it seems that The Borz was unable to make weight due to a medical issue.

I’m told the reason why Chimaev missed weight by so much was due to a “medical issue.” Unclear what that is and how that affects him long term.

This is according to Ariel Helwani’s report, but there is no clarity and the exact reason behind Chimaev stepping off the scales exceeding 7.5 pounds from the weight limit. There is a lot of doubts regarding Helwani’s report, as one of the fans claimed that Khamzat was drinking sparkling water and eating one night ahead of the weigh-ins.

Ran into Khamzat Chimaev He was hanging out at a restaurant for hours drinking sparkling water and eating the night before weigh ins and now Khamzat misses weight . I was worried all night about this when I saw it.hope the fight still happens tomorrow . #ufc279 pic.twitter.com/CMrFSxxtxO

Moreover, Chimaev came out and jokingly blamed Darren Till for his weight miss on Twitter. It is needless to say that this is one of the craziest things we have witnessed in the history of UFC. Do let us know your thoughts in the comments section below on this matchup between Khamzat Chimaev and Kevin Holland.