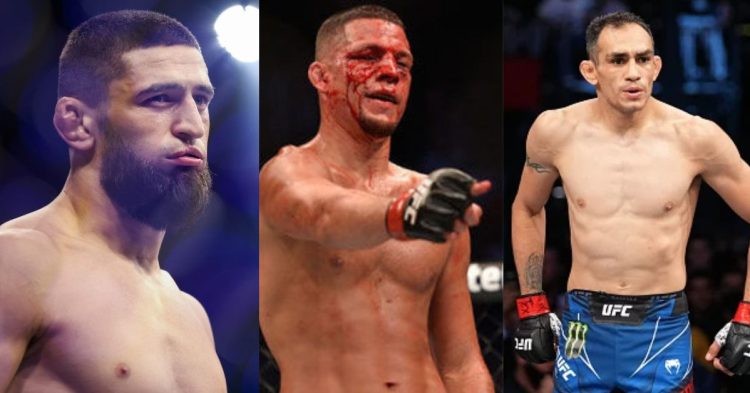 Nate Diaz was all set to step inside the octagon to take on Khamzat Chimaev in a five-round main event bout at UFC 279. This was supposed to be The Stockton Slugger’s last fight on the UFC contract.

However, it looks like Diaz’s wait to get back in action will be much longer after The Borz missed weight by 7.5 lbs. It is needless to say that this is a big blow for UFC as the main event of UFC 279 could end up getting cancelled. Owing to the fact that it is highly unlikely that Chimaev would be able to cut 8.5 pounds of weight in just one hour.

Khamzat Chimaev steps on the scale at 178.5 pounds, missing weight ahead of his #UFC279 main event bout. pic.twitter.com/uSbqRUVH83

Following this news, there were questions marks raised as to whether Nate would fight Khamzat Chimaev at catchweight. But there is a high chance that The Stockton Native would decline to fight as MMA Journalist Cole Shelton has reported that Diaz vs Chimaev is not happening. Cole Shelton spoke to one of Diaz’s team members and he claimed that Chimaev is cheating.

I talked to someone in Diaz’s camp who said “Khamzat fight’s not going to happen.” They believe Chimaev didn’t even try to make the weight and is basically cheating. The consensus around Diaz’s team is he’s either going to fight Tony Ferguson or not fight at all. #UFC279

As per a recent development from Nate’s camp, the Khamzat Chimaev vs Nate Diaz fight is officially cancelled and The Stockton Native has an opponent in his mind for the main event fight at UFC 279. Diaz wants to fight against Tony Ferguson and is not interested to fight anyone other than El Cucuy.

Another source inside Diaz’s camp has told me the “Khamzat fight is officially OFF.” They add Diaz and the UFC are currently negotiating to fight a new unnamed opponent, with Ferguson likely the lead front runner for that. But there’s a chance he doesn’t fight at all. #UFC279

UFC is currently working with Nate and his camp for a fight and they want to stay on the card, as per the recent reports, there is a high possibility that Ferguson will replace Chimaev and go against Nate in the main event.

The last 24 hours have been eventful, to say the least for the UFC after having to cancel the pre-fight press conference due to the backstage altercation and Khamzat missing weight.

Dana White recently made an appearance on Sportscenter and announced the new fights for UFC 279.

In the main event, now Nate Diaz takes on Tony Ferguson in a 5 round welterweight bout.

On the other hand, Khamzat Chimaev takes on Kevin Holland in a 5 round co-main event. Both fighters were involved in a brawl leading upto UFC 279 and now they will get an opportunity to settle their beef inside the octagon.

Besides that, Li Jingliang now takes on Daniel Rodriguez in the features fight of UFC 279.