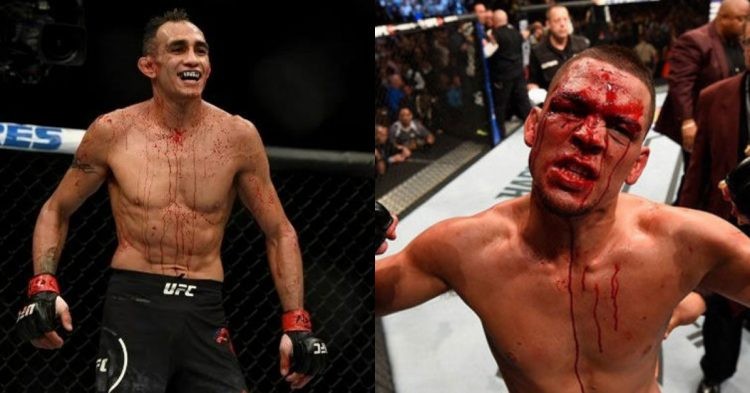 It looks like Nate Diaz will ultimately take on Tony Ferguson in the main event of UFC 279! This particular fight week will go down as one of the craziest fight weeks ever! Earlier, all the fighters involved in the top 3 bouts of the night, got into brawls against each other. Now, it looks like they will also swap opponents just before the event.

UFC President Dana White confirmed on Instagram Live that UFC 279 will now go on with Tony Ferguson vs Nate Diaz as the UFC 279 headliner, 5 rounds. Meanwhile, Khamzat Chimaev will face Kevin Holland in the co-main event, which will also be a 5 round fight.

It all started with Khamzat Chimaev failing to make weight for his UFC 279 main event. For non-title welterweight fights, fighters are allowed to weigh in at 171lbs. But Chimaev came in 178.5lbs which is 7.5lbs over the allowed limit. Not only did it put the fight in jeopardy, but it almost threatened to ruin the entire event.

But fortunately for the UFC, Tony Ferguson was on the same card to fight Li Jingliang. It looks like the UFC will promote Tony to the main event slot against Nate while Chimaev will now fight in the co-main event against Kevin Holland at a catchweight. Holland’s original opponent Daniel Rodriguez will reportedly face Li. It has to be the craziest last-minute change to a fight card ever!

Although Dustin Poirier expressed his wish to fight Nate Diaz on incredibly short notice, It does look like UFC will not make that happen. Reportedly, there are negotiations going on between the Diaz and Ferguson camp to sort out the details of the fight. While Tony wants the fight to be a 3 round affair, Nate is aiming for a proper 5 round battle.

It is understandable why El Cucuy wants the fight to be 3 rounds. His original fight against Li was scheduled for 15 minutes. So adding two extra rounds on a day’s notice is going to be a tough ask for the 38-year-old. However, a 5 round fight suits Nate Diaz more because of his fight style. But there has not been an official announcement yet as to what may happen.

One speed bump in the Diaz-Ferguson negotiations is the amount of rounds. Diaz’s team wants it to be five, Ferguson was preparing for three. Diaz’s camp tell me they don’t think it will be a problem. However, UFC exploring many different options. #UFC279

Although Nate vs Khamzat was an intriguing contest, the potential fight against Tony is a much more suitable bout for the 37-year-old. The chances of Nate winning against Chimaev were slim because of the age difference. But having Tony as his opponent balances out the odds and makes the main event much more interesting. Be that as it may, the fight will go down as a 5 rounder.