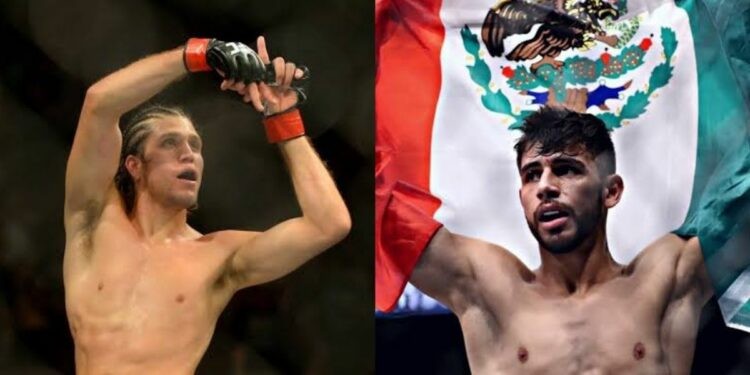 A few hours ago UFC announced that Brian Ortega will clash against Yair Rodriguez in a five-round main event bout on July 16 in New York, Long Island. It is needless to say that this news will come as excitement to fight fans as two of the most entertaining featherweights will collide inside the octagon.

Their impressive resumes are a testimony to why fans love them, T-City who has won eight of his ten fights in the UFC. With both his losses coming in a title fight. Moreover, Brian Ortega has a remarkable finish rate. Owing to the fact that he has won seven of his eight fights via KO/TKO or submissions.

Coincidentally, Yair Rodriguez has also won eight of his ten fights. Out of which three of his wins are from KO/TKO. Therefore this is an important fight for the title scenario of the featherweight division as the winner will most likely earn a title shot in the future.

Interestingly, both the fighters are on the back of losses. Hence it would be intriguing to see how they bounce back from their previous disappointments.

How did Brian Ortega and Yair Rodriguez fare in their last fight in the UFC?

Brian Ortega last fought against Alexander Volkanovski for the featherweight title in the main event of UFC 266 last year. This fight was a roller coaster ride as both featherweights were just inches away from finishing their opponent.

With T-City coming close to win the bout on a few occasions. Despite suffering an early onslaught in a striking battle with Volkanovski, Ortega showed great determination and bounced back in the third round. He almost submitted Alexander twice.

However, The Great miraculously escaped from the submission attempts of Ortega and landed a significant amount of power strikes to cut open the number one contender. In the end, T-City managed to survive the five rounds. However, Volkanovski won the fight via a unanimous decision to retain his title.

On the other hand, Yair Rodriguez made his UFC return after two years against Max Holloway in the main event of UFC Fight Night. The Blessed dominated the initial rounds of the bout with his brilliant boxing as he outstriked El Pantera. In the latter stages of the fight, Holloway smartly controlled Rodriguez on the ground and mixed it up with his striking.

However, Yair landed some big shots of his own in the fight. But that was not enough as Max cruised to a win via unanimous decision after five rounds of action.