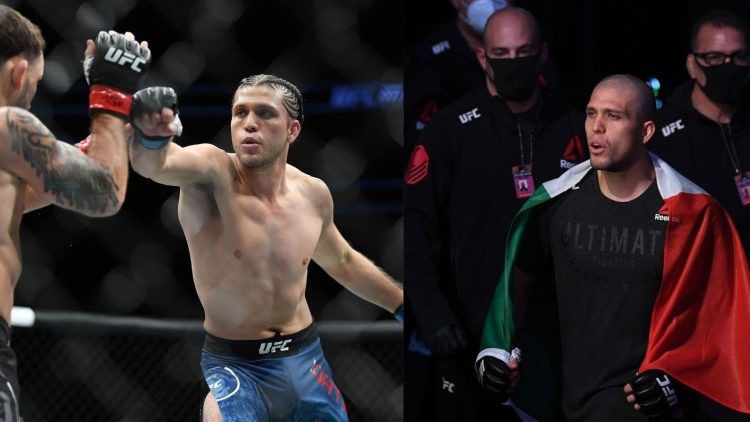 Brian Ortega remains one of the best featherweights in UFC despite his two failed attempts to capture the UFC title. With a record of 15 wins and 2 losses, Ortega is still a top contender in the division.

Besides that Brian Ortega is also aiming for his UFC lightweight debut in the near future. And with his grappling skills he can be a threat to some of the top 5 UFC lightweights.

The 31 year old UFC featherweight has knocked out former UFC lightweight champion, Frankie Edgar, UFC veteran Clay Guida. With a resume like this, Ortega has solidified his place as one of the top guys in the company. But, how much does he earn for his fights in UFC?

T-City made his UFC debut at UFC on Fox 12 against Mike de la Torre. The fight was turned into NC and Ortega earned a fight purse of $16,000 for his debut.

Brian Ortega made his PPV debut with the fight against Diego Brandao. Ortega submitted the Brazilian in the 3rd round and secured a fight purse of $26,500 including $2,500 Reebok sponsorship.

Brian ortega took on UFC veteran Clay Guida at UFC 199 and secured yet another impressive victory. For his KO win, Ortega earned a fight purse of $48,000.

T-City took on Cub Swanson in his first UFC main event and impressed the fans with a submission win. Ortega earned a fight purse of $163,000 including $50,000 fight of the night bonus and $50,000 performance of the night bonus.

With an unbeaten UFC record, Ortega fought for the featherweight title against Max Holloway. That was an era when Holloway was considered the greatest featherweight of all time and Alexander Volkanovski was on the come up.

Ortega suffered a crushing defeat in the hands of Holloway at UFC 231. However, for his first UFC title fight, Ortega earned $330,000 including $50,000 fight of the night bonus.

Brian Ortega took a coupe of years off and made his comeback to take on The Korean Zombie in another main event. Ortega put on a clinic and won the fight via unanimous decision. For the win, Ortega earned $225,000($110,000 to win and $110,000 to show)

Brian Ortega had the second opportunity to capture the UFC featherweight title at UFC 266 when he took on Alexander Volkanovski. Though Ortega came very close to submit Volkanovski in the end the featherweight champion was too tough and he won the fight via decision.

Despite the loss, Ortega secured the biggest fight purse of his career with a $332,000 fight purse including $50,000 fight of the night bonus.

As per reports from Sportsdaily, Brian Ortega’s UFC earning is around $1,570,500.

What is the Age Difference Between Gilbert Burns and Herbert Burns?