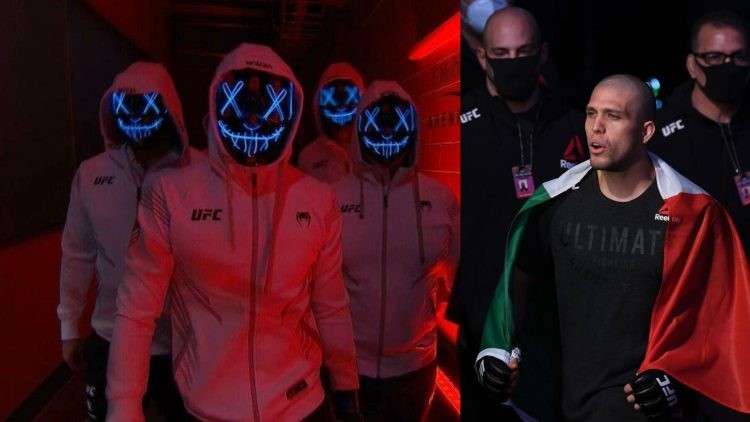 Despite two failed attempts at capturing the featherweight title, Brian Ortega is a top contender in the division. And it won’t be surprising to see him fight for the title again if he secures a dominant win in his next fight against Yair Rodriguez.

Brian Ortega fought Alexander Volkanovski in his last fight at UFC 266. The biggest takeaways for Ortega from that fight has to be the two close submissions that almost won him the title and his electrifying walkout.

Brian Ortega’s walkout for his second title fight was very unique and the crowd loved it. Fans on the internet also showed appreciation for the walkout.

T-City’s Purge-themed walkout stole the show and his performance against Volkanovski impressed the fans even more. Ortega walked out to the song “Sobrevive” by an Artist Mini Beat.

Brian Ortega and his whole team came out with LED masks which looked bada**, to say the least.

Is Brian Ortega’s walkout one of the best walkouts in UFC history?

Fans have witnessed many iconic walkouts over the years. Who can forget Conor McGregor walking out to “Foggy Dew” in an arena full of Irish to fight for the interim featherweight title against Chad Mendes?

Who can forget the iconic UFC 243 walkout of Israel Adesanya? The Stylebender arguably delivered the best walkout in UFC history when he put off a dance performance with his childhood friends before walking into the octagon and knocking out Robert Whittaker in round 2.

However, Brian Ortega’s UFC 266 walkouts certainly belong in the top 10 best walkouts by any UFC fighter. And it must be noted that Ortega gave a very tough challenge to the dominant featherweight champion, Alexander Volkanovski.