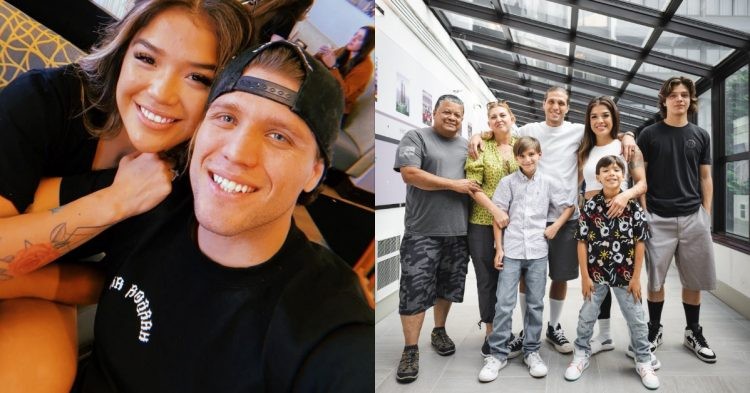 Brian Ortega is a fighter in the featherweight division of The Ultimate Fighting Championship (UFC). He is considered to be one of the most elite fighters in the division. He has quickly become a fan favourite in the division and has fought for the championship twice.

Although he is yet to capture the title, Brian Ortega is currently one of the biggest superstars of the division, he has a very humble background. Let’s take a deep dive into Brian Ortega’s childhood and his life outside the Octagon.

Brain Ortega’s family and his background before fame

Brain Ortega grew up in San Pedro, California. He was a resident of the Section 8 housing projects. In an interview, Brain revealed that growing up in that neighbourhood was difficult for him. The streets were infested with crime and being a hothead, Brian often found himself in the middle of a lot of bad situations. That’s when he joined Gracie Jui-Jitsu at the age of 13.

During the same interview, Brian revealed that practising Jui-Jitsu made him forget all the distractions in his life. He went on to add that he would either be dead or in jail if he did not have a medium of letting his frustrations go.

Hence, Jui-Jitsu was a big part of Ortega’s arc of finding peace and taking the right steps in his career to be where he is currently. He is a 1st-degree black belt in BJJ under his friend and mentor, Rener Gracie.

Brian Ortega was born on February 21st, 1991. He currently holds dual citizenship of both Mexica and the United States of America. His parents immigrated to the country from the Sonora region of Mexico.

He cited his father Martin Ortega behind his inspiration to become a fighter. As a family, they had to fight poverty but it was father Martin who instilled the fighting spirit in him.

“My dad dreamed of being a fighter himself, so he gets to live his life through me. It’s a pretty cool feeling. He was dreaming about being a boxer, but he was one of the baddest street fighters you’ll ever meet.” (h/t via Fighters Only Magazine)

It is very apparent that he has a very tight relationship with his father. In a video posted on his Instagram, Brian was recently seen surprising his father by gifting him a new vehicle. He also posted a picture on his father’s birthday, where he called him a ‘king.’

Does Brian Ortega have children?

Brian Ortega has two children and both of them are boys. According to Player Gf, He was in a relationship with Stephanie Roberts. Ortega and Stephanie had a long-term relationship. Both of Ortega’s children were with Roberts. However, they are no longer dating.

Ortega often posts photos of his sons on his social media accounts. By all means, Brian seems like a loving father

After splitting with Stephanie Roberts, Brian Ortega is currently dating fellow UFC fighter, Tracy Cortez. Cortez made her way into the UFC after beating Mariya Agapova in Dana White’s contender series.  She has a career record of 11-1 and has been unbeaten so far in the UFC.

Although it is not clear when the couple started dating exactly, they have been together for a couple of years now. Ortega seems to have a very affectionate relationship with the UFC flyweight fighter. Both Ortega and Tracy share pictures with each other on their social media pages on a daily basis and it seems like their relationship is as healthy as ever.