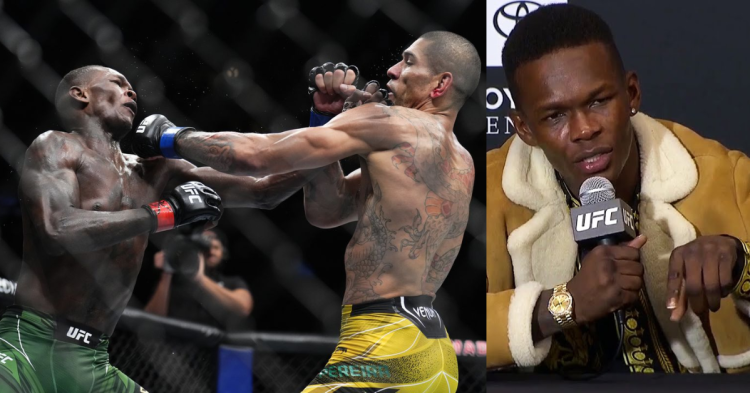 Following his knockout loss to Alex ‘Poatan’ Pereira at UFC 281, Israel Adesanya has addressed a few issues in the post-fight presser. The Last Stylebender lost to the Brazilian in the fifth round through a sequence of punches, in front of a sold out MSG Arena. The sequence started with a right hand which made way for Pereira’s trademark left hook.

Adesanya was visibly rocked once the left hook connected, and Pereira didn’t give him any time to regain his wits. This was the turn of events that led to the UFC finding itself with a new Middleweight Champion. The fighters were quite respectful after the fight. They gave each other props for fighting it all out.

There were a lot of questions raised about the referee’s stoppage. A large number of fans, which can be presumed to be Adesanya’s, spoke out on the stoppage being an early one. The comments section of about every post about the bout on various platforms has been flooded with such accusations. A lot of fans took to Twitter to express their dismay:

Did anyone think that stoppage was early? Could he have taken maybe a few more? Yeah, but I don't think he was recovering. I still think we would have the same result.

Izzy was absolutely robbed in my opinion, Pareira did well but it was early stoppage.
Sucks for Israel Adesanya. #UFC281 pic.twitter.com/SLrQmhc2BM

Israel Adesanya speaks out on the controversial stoppage

Adesanya himself gave all the props to Pereira. He said that Pereira deserved the win. Adesanya believes Pereira had a good gameplay for the fight and he executed it nicely. Even though there is controversy surrounding the stoppage Adesanya did not complain about the fight ending sequence after discussing with his team.

“Nah, I talked to my coaches (about the stoppage) and I trust them. But I was fine, I was fine. I could see everything. My eyes might have rolled back a little, but I was lucid. My ego would say at least let me go out on my shield but I don’t think I would’ve gone out because I was still there. I’ve seen worse stoppages. Bring back Steve Mazzagatti, bring back Steve Mazagatti. I would’ve been fine. He would’ve won that round but I still would’ve been Champion.”

Steve Mazagatti is a referee who’s notorious for his late stoppages. UFC president, Dana White has openly criticised Mazagatti in the past on multiple occasions and even wanted him to retire.

Israel Adesanya said that he would’ve liked to ‘go out on his shield’. But he did not exactly call a stoppage an early one. Even though Adesanya was wobbled many fans believe he could have continued and deserved an opportunity to fight back in a title fight.

The crowd seems to be divided upon this topic. However, the majority of the fans agree with the referee’s decision to stop the fight as Adesanya was badly hurt and was not doing enough to protect himself.